Fixing the machinery of democracy

The goal of medianism.org is to focus less on a minority with elite power and more on the vast group of people in the middle or even below the middle. In economics, that means focusing more on the median income, and in politics, that means focusing on the median political view. That is just another word for democracy. Most people think that the USA is a democracy in which the majority rules, but we aren’t.

Like most democracies in the world, our democracy is flawed in a way that becomes obvious after you think about it for ten minutes.  We are have a plurality voting system, not a majoritarian voting system.

Our main flaw is shared with most election systems around the world. It is that they are pluralistic, not majoritarian. They elect NOT the choice of a majority, but the choice of the biggest plurality.

I was first introduced to the plurality problem in an election for the German Club President in High School.  There were about 10 girls and only about seven boys in the club and the girls stuck together and voted for girls and the boys voted for boys.  That meant that the political potential for us boys seemed hopeless until Darren Friesen figured out how to rig the election by introducing spoilers.

He led a conspiracy among the boys to unify around one boy candidate and then various boys each nominated about four of the girls.  The girls who got nominated by boys were very flattered that we would nominate them until after the election when they discovered it was just a plot to use them as spoilers who would assure victory for the boy candidate.

In the election, the boy got seven votes and each girl only got a couple votes, so the boy won even though a majority of the electorate preferred any of the other four candidates over the winner.  That flaw in the electoral system made the girls quite cynical about the “democracy” just like it leads to cynicism about democracy in national elections.

A plurality voting system is problematic any time there are more than two candidates which is why it always causes problems during presidential primary elections.  For example, Trump should never have been selected as the Republican candidate because a majority of Republicans opposed him throughout the primaries. Because Trump’s opposition was split until near the end, he actually only got a fairly small minority of Republican votes in the primary. Less than 15% of eligible Americans showed up to vote in the Republican primaries, and a minority of them chose Trump, so only about 6 percent of eligible American voters actually selected Trump in the primary which is 4% of all Americans. Trump developed a very enthusiastic following of 4% of Americans who showed up to rallies and supported him in the primaries, but that was a tiny minority of Americans that selected one of the two candidates that we were all limited to voting for in the general election. Although Trump had higher negatives and lower overall support than any other Republican candidate during the primary, he won states because he had a small plurality of enthusiastic supporters who loved the unusual features that separated Trump from the rest of the Republican field.

In the early contests, Mr. Trump attracted less than 50 percent of the vote… a majority of voters rejected him. But he faced more than one opponent every time, so that the non-Trump vote was split. That implies he could well have been defeated in most (given his extreme views on many subjects) had the opposition coalesced around one of his leading rivals. In such a scenario, he might have been out of contention long before he could ride his plurality victories toward his first outright majority win…

American primaries are not the only recent elections to produce winners lacking the support of a majority of voters. In India, the Bharatiya Janata Party received only 31 percent of the vote in the last general election, but got a majority of parliamentary seats. (Even including political allies, their vote share was no more than 39 percent.) The B.J.P., a right-wing party with a Hindu ideology for which only a minority of Hindus voted, has been running the government since, which is fair enough, given the electoral system. But it has also been persecuting political dissent as “anti-national.” Even majority support doesn’t give leaders in a democracy a right to stifle dissent. Invoking the battle cry “anti-national” in the name of the entire nation seems especially pernicious from a government without majority support.

As with the Republicans and Mr. Trump’s flirtations with fear and violence, India now suffers the ill effects of a serious confusion when a plurality win is marketed as a majority victory.

… Replacing plurality rule with majority rule would improve American primaries. More broadly, an understanding of the critical difference between a plurality and a majority could improve politics around the world. In an open letter to Prime Minister Narendra Modi in India, Gopal Gandhi, Mahatma’s grandson, wrote that “69 percent of the voters did not see you as their savior,” adding that they also “disagreed on what, actually, constitutes our [country].”

Sen and Maskin propose a voting system that is much better than our plurality voting system, but their article has some subtle errors because they promote a system that isn’t as good as Approval Voting or Score Voting. But I like it better than the popular instant runoff voting (IRV) system.  That system would have elected Cruz because it would eliminate the candidate with the fewest first-place votes (Kasich) and then see who those voters prefer (Cruz).  If you want a fun, in-depth explanation of all these voting systems, read Gaming The Vote by William Poundstone or for a shorter read, see Nicky Case’s website.

Poundstone shows how bad our voting system has been for the presidency (page 91). Here is an amended excerpt of some of the bigger failures:

Most Americans recognize that America’s unique electoral college system is undemocratic, but that is far from the worst part of our system.  At least 11 out of 49 presidential elections did not go to the most popular candidate and seven of those flawed elections were due to spoilers whereas the Electoral College only failed us four times. That is a overall failure rate of at least 22%.  Poundstone writes, “Were the plurality vote a car or an airliner it would be recognized for what it is — a defective consumer product, unsafe at any speed.”

A lot of these presidents were disasters.  Even though I love Lincoln, and he was a great president, the 1860 election that gave us Lincoln also gave us the Civil War which killed a larger percentage of the US population than any other war so that election was hardly a success.

The fact that our elections are being won by plurality minorities who aren’t popular is one reason democracy itself isn’t very popular right now. But a lot of the so-called failures of democracy are not really failures of the popular will. They are really examples of how voting systems are not democratic because they elect someone that the majority rejects. This is leading to democracy becoming so unpopular that voters have essentially rejected it in some nations by voting for authoritarian rulers! It could happen in the US too.  Here is a scary chart by the New York Times showing how support for democracy has plummeted around the world among young people. 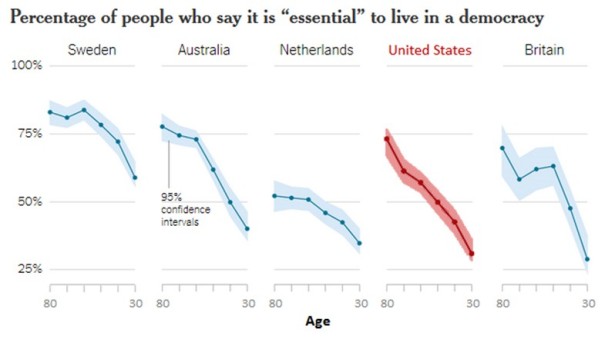 Less than 30 percent of American millennials think it’s essential to live in a democracy and millennials are our future. Although this data predates the Trump’s election, Trump is uniquely unpopular among millennials (compared with all other presidents on record).  Whereas Trump has had the lowest approval overall rating in US history at around 41 or 42% on average, his approval ratings are much lower among young people and are highest among senior citizens who remain relatively content with both Trump and our democracy.

If a democracy is supposed to be a system in which a leader must get the approval of the majority of the population, how did we end up with Trump who has never achieved the approval of the majority of Americans?  Gerald Ford is the only previous president who began his presidency below 50% approval, but he wasn’t elected president. (The graph lacks a vertical scale, but the continuous horizontal line is at 50% for reference and the shaded area marks the average approval rating for each president.)

A 54% majority voted against Trump. Even many people who voted for Trump really disliked him and wished they had another option to vote for. Polls suggest that Trump would have lost in a 2-way election against every other plausible candidate whether Republican (Kasich, etc.), Democrat (Clinton, Sanders, etc.), or third party (Johnson, Stein, etc.).

Fortunately Trump hasn’t done anything disastrous as president, but there are numerous examples throughout history when a terrible person was elected because the machinery of elections had the pluralist flaw that our system has and a passionate minority selected a leader against the will of the majority. For example, Hitler won an election where he seems to have been opposed by vast majority of the electorate.

Hitler wasn’t a failure of bad judgement for the German people. His election was a failure of the democratic machinery to recognize the popular will. There are numerous examples of democratic machinery selecting unpopular candidates like this throughout history. Recently in India the extremist Hindu Bharatiya Janata Party won with only 31 percent of the vote, and has been running the country with the sort of extremist policies that the minority wants. Mohamed Morsi won in Egypt with similar levels of support from a minority of extremist Muslims.  His unpopularity later led to his deposal in a military coup.

The machinery of our democracy was put into place at a very undemocratic time when only a tiny percent of Americans were allowed to vote and slave-owners got extra voting power for owning more slaves even though slaves could not vote. Indeed, slavery is one of the reasons the Electoral College was instituted. It gave slave states more power than they would have had under a popular vote and there is still an element of this.  Bill O’Reilly supports the Electoral College on the basis of preserving “white privilege.”  Since the Constitution was first written, our democracy has changed from something that white male elites enjoyed to something that most Americans enjoy.  Here is a list of selected improvements to US democracy.

As a result of these kinds of changes, the percent of Americans who vote has dramatically risen over the years:

Mass democracy is a very new thing in the history of the world. There were zero nations where a majority of the adult population could vote in 1900. Today the majority of the world’s nations has universal suffrage or thereabouts. More progress should be expected in the next century to make democracy work better at representing the will of the majority. Anti-democrats often rail against democracy by calling it a dictatorship of the majority, and that is the worst possible way to think about it.  But any other political system would be a dictatorship of a minority which is even worse. America’s system regularly gives a dictatorship to a minority to select our president against the will of the majority. A simple solution would be to eliminate the electoral college and use approval voting or score voting instead. Instant runoff voting is an alternative that has gotten a lot more attention, but it isn’t as good even though it too would still be a big improvement over our present system.

3 comments on “Fixing the machinery of democracy”