Home › Medianism Home › MELI FAQ › M8 Does GDP have any advantages over MELI?

M8 Does GDP have any advantages over MELI?

MELI won’t ever completely replace GDP because GDP will always be a better measure for certain purposes.  For example, it will always be a longer historical data series than MELI for examining the past.  GDP will also always be better for the purpose that it was originally invented for.  GDP was first measured during the Great Depression when Roosevelt wanted better information about whether overall economic production was increasing or decreasing and to see differences in economic growth in different sectors of the economy. GDP and MELI have different advantages for analyzing recessions, but GDP is better for examining particular sectors of production like housing, oil, or exports.  Soon thereafter, GDP became useful for ascertaining how much production the US could muster for fighting World War II. GDP is clearly the better measure for analyzing the capacity for war production. Examining the components of GDP will always be useful for this kind of sectoral analysis, but per capita GDP is a completely different animal.  Per capita GDP is almost always used as a welfare measure and it should be eliminated because MELI is always better for measuring welfare.

GDP is useful for macroeconomics, but median income should also be at least as important as GDP.  For example, a recession is defined as a time when there is a drop in total income (meaning GDP drops). These periods are marked on the graph below with shaded grey bars, but these official recessions are not what the most Americans experienced.  This graph shows that the majority of Americans really went into a recession sometime in 2008 and stayed in a recession for over twice as long as the official dates show.  This is because median income started declining at the beginning of 2008 and kept dropping for more than twice as long as GDP dropped. It is hard to pinpoint exactly when median income started declining because the median income data is noisy and poorly measured.  It is much noisier than GDP data because the government spends many times more resources measuring GDP. Even when the median income stopped dropping at the end of 2011, it stayed stagnant for the next two years without any significant recovery.

The graph shows that the majority of households essentially stayed in a recession for about five years and have still barely begun to recover. But economic policymakers at the Fed stopped caring about the recession in 2009 when it officially ended.  The Fed doesn’t know or care that the majority of Americans are still in a recession.  The Fed has been prolonging the economic misery for most Americans because the Fed is paying too much attention to GDP and ignoring median income.  Most uses of GDP are for normative judgments about how successfully “the economy” is working or growing in a welfare sense and this is a case in point. The Fed thinks that it is much more successful than it really has been because it is looking at this graph which indicates success: 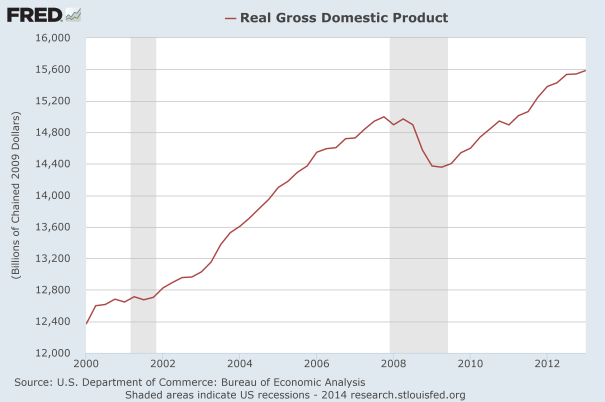 MELI would be a better guide for overall macroeconomic policy (at the Fed and elsewhere) than GDP even though some parts of GDP (sectoral analysis in particular) will always be useful for understanding how to help MELI recover.