M5. Why doesn’t anyone care about existing measures of median income?

Secondly, Kuznets began measuring GDP about 80 years ago, but even before that, economists spent decades developing theoretical machinery to support it. For example, at the turn of the 20th century, Vilfredo Pareto was already arguing that the best way to help everyone in an economy, including the poor, was to increase mean income because the benefits would trickle down due to what Pareto saw as the inevitability of inequality which is today called the Pareto distribution. Pareto way laying the foundations of the mutilitarianism. The mutilitarian revolution is sometimes called the Paretian revival in his honor.

Thirdly, median income, like GDP or inflation, is not completely straightforward to measure. The most common form of median income data is median household income and its main problem is that a household is not a fundamental unit of welfare; a person is. If one household earns $100k and a neighboring household earns only $50k, that says almost nothing about the welfare of the people in the two households because we don’t know how many people are in each household. If there are five people in the first household and only one person in the second, that would give a very different picture of relative welfare than if the populations were reversed.

The composition of the median household also changes over time. For example, here is a graph from Mark J. Perry showing changes in average household size: 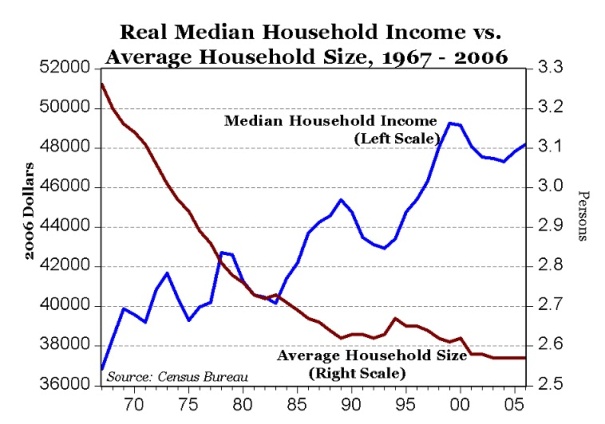 There is some arbitrariness to any formula for how income should be adjusted for household size and composition, so adding this bit of complexity invites some controversy. As David Betson says, “‘equivalence scales are inherently arbitrary’ and as such are in reality subjective judgments masquerading as science”, such that “the setting of scales is more a matter of policy judgment than the application of scientific theory.” But there are already standard procedures for adjusting for household size that the Census Bureau uses in estimating poverty levels and for estimating inequality. Oddly, the Census Bureau does not do the same kind of equivalence adjustment for measuring for measuring median income. Other statistical agencies like the OECD also do equivalence adjustments for household size, but neglect median income.

MELI could help make household size adjustment a bit easier. (HYPERLINK coming soon), but economists have not considered it because of their mutilitarian ontology which restricts their imaginations.

←Back to Medianism FAQ Table of Contents