The New York Times said “The current opioid epidemic is the deadliest drug crisis in American history.” Last August, Donald Trump declared, “The opioid crisis is an emergency, and I’m saying officially right now it is an emergency… It’s a national emergency. We’re going to spend a lot of time, a lot of effort, and a lot of money on the opioid crisis.” But that was just a declaration to reporters at his golf resort without any official action. Two and a half months later, he finally got around to changing actual policy, but he stopped short of declaring an official state of emergency. Instead he declared a Public Health Emergency which doesn’t raise any additional funding, but allows the government to use a special fund that currently has just $57,000 in it. That is less than one dollar per death!  Vox said, “America’s opioid epidemic is so bad it’s causing average life expectancy to drop” because the problem has been skyrocketing: 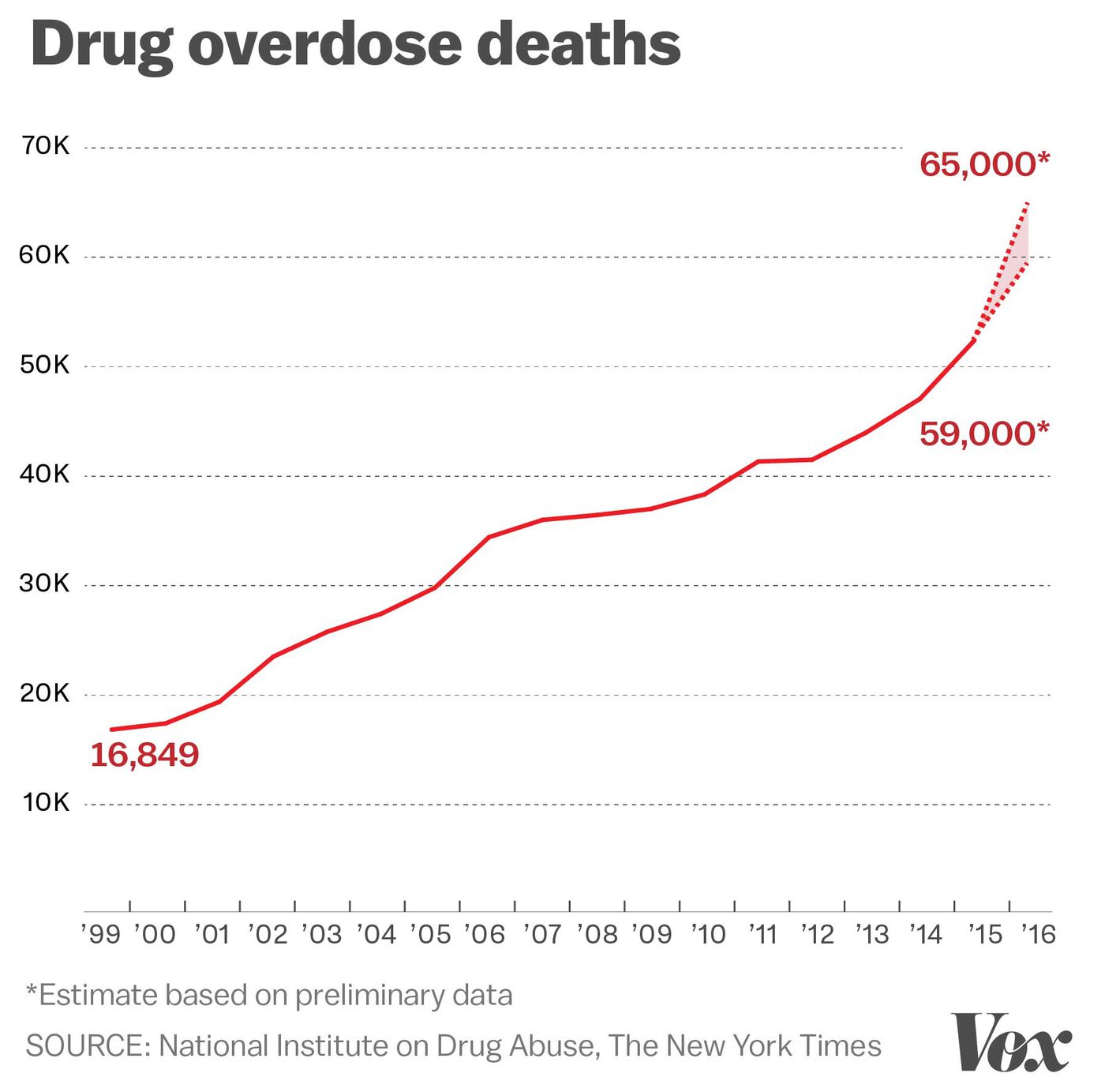 In one year, drug overdoses killed more Americans than the entire Vietnam War did… a new report by Josh Katz for the New York Times, …calculated that 59,000 to 65,000 people died of overdoses last year… In comparison, more than 58,000 US soldiers died in the entire Vietnam War [over the course of 14 years], nearly 55,000 Americans died of car crashes at the peak of such deaths in 1972, more than 43,000 died due to HIV/AIDS during that epidemic’s peak in 1995, and nearly 40,000 died of guns during the peak of those deaths in 1993.

In contrast, in the fifteen years after 9/11, jihadi terrorists have only killed 94 people inside the United States according to the New America Foundation, but most Americans are much more worried about the war on Islamic terror than the war on opioids.  Of course most terrorist deaths in the US aren’t due to Jihadis, so all terrorism is a larger risk than just Islamic terror, but regular homicides, like the mass shooting in Las Vegas, are a much bigger problem yet.

As the above graphic illustrates, people are bad at rationally assessing risks. For example, we are more scared of terrorism than homicide and more scared of homicide than opioids.  But what we really should be scared of is another drug altogether because opioids are not even the deadliest drug in the US.  As German Lopez explains, The New York Times was wrong to call it “the deadliest drug crisis in American history.”

[another drug besides opioids] was associated with more deaths…  alcohol.

According to the Centers for Disease Control and Prevention (CDC), alcohol is linked to 88,000 deaths each year… it’s a very high death rate — making alcohol the third leading cause of preventable death in the US. What’s worse, the 88,000 number may, at this point, be an underestimate. The figure comes from an analysis of deaths between 2006 and 2010. But since then, we’ve seen some signs that alcohol deaths may have gone up: Between 2010 and 2015, the number of alcohol-induced deaths (those that involve direct health complications from alcohol, like liver cirrhosis) rose from nearly 26,000 to more than 33,000.

Alcohol isn’t even the deadliest drug in the US; that would be tobacco. Smoking is linked to, depending on the estimate, 480,000 to 540,000 deaths each year — the leading preventable cause of death in America. (This figure is potentially too high, since it’s based on mortality data from 2005 to 2009, and smoking rates have dropped since then. Still, it’s an extremely high death toll.)

Yet all of these deaths didn’t inspire President Donald Trump or the presidents before him to formally declare a public health emergency over tobacco or alcohol, as Trump finally did for opioids on Thursday. We don’t often call alcohol or tobacco “epidemics,” even as we regularly use that same language for opioids that are linked to a fraction of the deaths from alcohol or tobacco.

Maybe we should. We have a lot of evidence that we could do much more to combat alcohol and tobacco deaths. But we haven’t….

There are plenty of things we could do about alcohol and tobacco.

In drug policy discussions, we typically talk about drugs in a binary framework: You either legalize them or prohibit them… The reality, though, is there are plenty of policy interventions we could take on before reaching for prohibition.

For alcohol, the research backs raising the alcohol tax. It supports limiting the number of alcohol outlets. There are innovative evidence-based policies that temporarily yank a person’s right to drink if they get in trouble with the law due to alcohol. We could also put states, instead of private businesses, in charge of alcohol sales, which the research shows can keep prices higher, reduce access to youth, and reduce overall levels of use. And we could increase access to evidence-based addiction treatment.

With tobacco, we have other evidence-backed policies: raising taxes to reduce access; improving access to safer alternatives to smoking like nicotine gum, nicotine patches, and e-cigarettes; using stronger warning labels; and raising the smoking age… These policy interventions, though, aren’t pushed with the same kind of vigor and all-hands-on-deck effort we see with opioids, at least rhetorically, today. That’s especially the case with alcohol, which is many Americans’ drug of choice and has a powerful, big lobby behind it — making lawmakers cautious about raising alcohol taxes even to keep up with inflation or instituting policies as simple as labeling alcohol with nutrition facts.

3 comments on “The worst drug epidemics in American history”