The best marijuana policy is the least popular: decriminalization

Americans tend to be conservatives in the sense that we tend to be risk averse.  We don’t want to change our system unless there is a really good reason. But we are embarking on a radical social experiment in marijuana legalization due to vested interests who see a profitable new market to exploit. As Annie Lowry reports:

“The reckless way that we are legalizing marijuana so far is mind-boggling from a public-health perspective,” Kevin Sabet, an Obama administration official and a founder of the nonprofit Smart Approaches to Marijuana, told me. “The issue now is that we have lobbyists, special interests, and people whose motivation is to make money that are writing all of these laws and taking control of the conversation.” … “Here, what we’ve done is we’ve copied the alcohol industry fully formed, and then on steroids with very minimal regulation,” Humphreys said. “The oversight boards of a number of states are the industry themselves. We’ve learned enough about capitalism to know that’s very dangerous.”

There has been an overwhelming sense that the current federal policy of marijuana criminalization isn’t working.  We have been locking up too many people for marijuana use and it is only ruining lives.  Lowry reports that we still arrest more people for cannabis than for all violent crimes combined. Our jails take nonviolent drug users and by immersing them into a new life with a group of hardened criminals for years, they become more likely to develop a new kind of lifestyle that goes beyond simple marijuana use when they get out, particularly when employers actively discriminate against them as ex-felons.  So they gain new habits, skills, and social networks that make crime more productive and they lose opportunities to do legitimate work.

Unfortunately, Americans tend to have simplistic, fundamentalist views about drug policy and think that if statist criminalization doesn’t work, then the most radical polar opposite must be best: full-out free-market legalization.  They don’t see that a more conservative, incrementalist approach would be a better option: decriminalization.  That is what a recent Mason-Dixon Polling and Strategy survey found.  Vox made a graph showing the result: 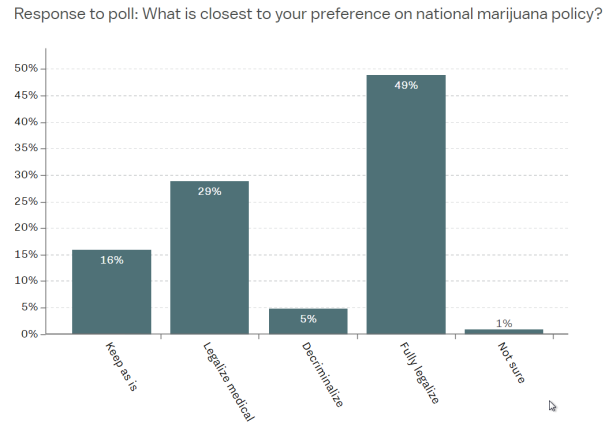 The least popular option is decriminalization and I think that is because most Americans don’t understand what that means. That means that you treat marijuana more like tobacco, but with harsher regulations. You allow permits for legal medical use of marijuana, but rather than using jail time to penalize use, you just use financial penalties (fines) to prevent a marijuana industry from becoming profitable for corporations and lobbyists. If marijuana is fully legalized, then Cargill will invest millions bioengineering more potent new varieties that will be grown on giant corporate farms. Phillip Morris will manufacture joints and vapes and hire Madison-Avenue corporations to market it on TV. Walmart will sell it at the check-out counters. With the economies of scale that these corporations can bring to the industry, marijuana will be the cheapest intoxicant in all of human history. A potent dose will sell for a couple cents at most. It will be about as expensive as the little sugar packets that restaurants give away for free with their tea and coffee. For this reason, I don’t foresee new marijuana bars springing up around our college campuses, but restaurants might give it away as a loss leader because it is an appetite inducer and Doritos might even include free joints with each bag of chips to give people more munchies.

The danger of fully legalizing marijuana is that it will dramatically change American culture a bit like the importation of tobacco changed Western society, but with potentially worse effects. America is permanently addicted to alcohol and tobacco because there is a concentrated financial interest (corporations) and a large group of users who fight to maintain these industries that each kill more people than all illegal drugs put together (although rapidly rising opioid deaths may have beat out alcohol for the first time last year) and cause numerous other social costs like illness and family breakups. If marijuana is fully legalized, it will essentially be given away for free and we have no idea how that will change society.

That is why the conservative approach to marijuana policy should be decriminalization first. Then if that goes well (and I’m sure it will be better than current policy), we will have more information to help us consider whether we should attempt full legalization. Going straight to full legalization might be better than the status quo (which the Trump administration is promoting), but it might be worse and decriminalization eliminates the horrible social cost of jailing so many able-bodied youth without creating a marijuana industry with the corporate resources to engineer a 180-degree change in American norms.

Rand Corporation created a chart showing a spectrum of marijuana policies between full out prohibition and full-out free-market legalization.  The least risky social engineering policies would be to gradually move down the chart rather than immediately swing all the way in a kind of shock therapy which will bring on future aftershocks.

As German Lopez points out, our most damaging drugs have always been our legal drugs:  “Excessive drinking is linked to 88,000 deaths a year, and tobacco smoking to 480,000 to 540,000 deaths a year.”  Even the opioid epidemic was entirely brought about by legal, prescription opioids.  Adding another addictive drug to the list of legal drugs might not help make America great again unless it is heavily regulated.

2 comments on “The best marijuana policy is the least popular: decriminalization”