Revealed Preference: The Fed Favors Money Hoarders Over The Unemployed

Posted on February 25, 2014 by Jonathan Andreas — Leave a comment

Ryan Avent at The Economist produced some original research about what the Fed thinks:

HAVING combed through the Fed transcripts the old-fashioned way, we decided to apply some fancier techniques. We plugged all 1,865 pages of central-bankery into a computer programme and came up with a few extremely informative nuggets. First, there is only one winner in the dual mandate. The word “inflation” (or variants thereof, such as “inflationary”) was mentioned a cool 2,664 times in 2008; “unemployment” pops up just 275 times.

It turns out that the Fed cared about inflation ten times more than it cared about unemployment.  And that was at a time when unemployment was at one of its worst levels in the past century and inflation was lower than it had been since the end of the Great Depression.   Imagine how little the Fed must care about unemployment in more normal times (like now) when it is merely 7.3%.  Nevermind that it is still higher now than when Clinton made his unofficial campaign slogan, “It’s the economy, stupid.” 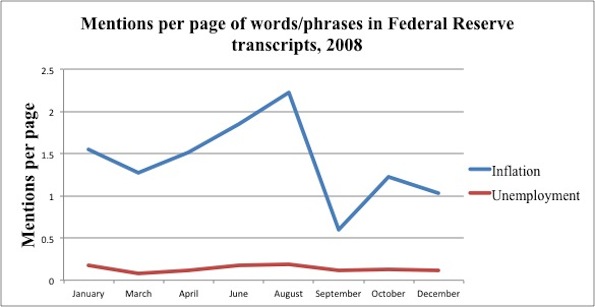 When the Fed prioritizes inflation over unemployment it is prioritizing the interests of money hoarders, who fear inflation above all, over the interests of unemployed people who want to work but can’t find jobs because there isn’t enough money circulating in the economy to hire them.

Ryan Avent’s article helps dispel the myth that the Fed has a dual mandate to fight unemployment and inflation.  As I wrote before, the Fed does not really have a dual mandate.  It has a triple hierarchy of desires: