Home › Macro › National Debt is NOT like Personal Debt

Note: There is a newer version of this post.

Krugman explains that government debt can never be repaid when we owe it to ourselves.

Deficit-worriers portray a future in which we’re impoverished by the need to pay back money we’ve been borrowing. They see America as being like a family that took out too large a mortgage, and will have a hard time making the monthly payments.
This is, however, a really bad analogy in at least two ways.
First, families have to pay back their debt. Governments don’t — all they need to do is ensure that debt grows more slowly than their tax base. The debt from World War II was never repaid; it just became increasingly irrelevant as the U.S. economy grew…
Second — and this is the point almost nobody seems to get — an over-borrowed family owes money to someone else; U.S. debt is, to a large extent, money we owe to ourselves.
This was clearly true of the debt incurred to win World War II. Taxpayers were on the hook for a debt that was significantly bigger, as a percentage of G.D.P., than debt today; but that debt was also owned by taxpayers… So the debt didn’t make postwar America poorer. In particular, the debt didn’t prevent the postwar generation from experiencing the biggest rise in incomes and living standards in our nation’s history.
But isn’t this time different? Not as much as you think.
It’s true that foreigners now hold large claims on the United States, including a fair amount of government debt. But [Americans now hold large claims on foreign nations too.] Every dollar’s worth of foreign claims on America is matched by 89 cents’ worth of U.S. claims on foreigners. And because foreigners tend to put their U.S. investments into safe, low-yield assets, America actually earns more from its assets abroad than it pays to foreign investors. If your image is of a nation that’s already deep in hock to the Chinese, you’ve been misinformed. …
Now, the fact that federal debt isn’t at all like a mortgage on America’s future doesn’t mean that the debt is harmless. Taxes must be levied to pay the interest, and …taxes impose some cost on the economy, if nothing else by causing a diversion of resources away from productive activities into tax avoidance and evasion. But …nations with stable, responsible governments …have historically been able to live with much higher levels of debt than today’s [levels]. Britain, in particular, has had debt exceeding 100 percent of G.D.P. for 81 of the last 170 years. When Keynes was writing about the need to spend your way out of a depression, Britain was deeper in debt than any advanced nation today, with the exception of Japan…

If countries can have government debt that is higher than 100% of national income (GDP), then why not always borrow?  The problem with too much government debt is high interest rates.  If the government borrows too much, it could suck up all of the cheap loanable funds which would cause higher interest rates for everyone.  And an interest burden is an extra redistribution from taxpayers to savers that should only be done when the benefit exceeds the dead weight loss of the extra taxes to pay the interest.  The basic rule is that you should borrow money to pay for an investment with a long payback period where the return on investment is greater than the interest payment.

We are not bankrupting future generations by borrowing from Americans.  We are committing to raise taxes on future generations in order to pay other people in that generation who will inherit the bonds.  It will just be a transfer from future taxpayers to the future heirs of the people who are currently lending their savings to the government.  As Moneybox writes:

If you think about a household that’s facing some obvious future expense (retirement or kids going to college) the thing you want to do is reduce consumption below income. The idea is to accumulate financial assets—stocks and bonds and bank accounts… Then in the future when you need consumption to exceed income you can liquidate your financial assets. This same strategy also works great if you’re Norway or Abu Dhabi or some other small country.

To “save money” means to lend it to someone else.  The only way for a country to truly save money is to lend it to foreigners.  Norway, Abu Dhabi, Japan, and China are examples of countries that are doing just that and Norway is explicitly doing it to save money for their greying population.  As the Norwegian population becomes more elderly, they will spend down their national savings held abroad, and that will help pay for elder care.  But Norwegian population is only a few hundred thousand people larger than the Detroit metropolitan area, so they can get away with lending money abroad to save for retirement (just like Detroit could save by lending to Wall Street).  But the US is over 20% of the world economy.  The massive size of the US economy makes it much less practical to lend large amounts abroad and we mostly borrow from ourselves.

Plus, the US borrows in our own currency and we have the ability to pay back our debt to foreigners by simply printing more of our currency.  Would you be worried about paying back debt if you had a printing press to print money sitting in your basement?  The US government really does have a printing press, so the government should not be worried about debt.  The lenders should be worried about inflation, but they are not because they are lending money to the government at historically low interest rates.  There has never been a debt crisis in any country in a currency that the country could print.   Greece would have no problem today if it borrowed in its own national currency.  Greece’s problem is that it borrowed in euros which are controlled by the ECB in Germany.
The only salient danger of government borrowing is whether it raises interest rates which could crowd-out private investment (which isn’t currently happening) because the only thing that really matters for future generations is the investment in real assets that we leave for them.   If rapture happened and a group of Bluffton University students were the only people left behind on earth, how would they save for retirement? The government debt problem would have completely vanished.  Moneybox (mentioned above) examines this too.

The result is that we’re basically left with a much more primitive kind of savings problem. Something closer to a farmer in the pre-industrial era who’s trying to save up for winter. To save for winter you can’t just sell your surplus food during the fat months and stockpile financial assets. During the lean months there won’t be any food for sale. You need to actually stockpile surplus food and other tangible commodities. That means [smoking meat], finding a dark cool place to stash your potatoes, chopping a bunch of firewood, etc.
…The idea is to tradeoff [current] consumption in order to obtain long-lasting goods. The federal government, …unfortunately, doesn’t engage in proper balance sheet accounting. So if you borrow $10 million to do road repairs, that shows up as an increase in indebtedness. The right way to think about it, however, would be that the road is a depreciating asset that has a value. Every year it goes unrepaired, its value declines. So borrowing $10 million to fix the road might improve the government’s net financial position, depending on [how much value the project creates]. Right now we’re at a time when it’s never been cheaper to finance federal borrowing. Consequently, borrowing money and spending it on sound projects of long-duration is the best way we have to “save” for the future even though it technically adds [financial] debt. Now of course spending money on something dumb doesn’t help. But deferring repairs and useful investments for the sake of borrowing less is going to leave us poorer in the future rather than richer.

To add to this last point, if you were running a huge corporation, and sometimes it costs 15% interest to borrow money and other years it costs 2.5% interest.  When would you borrow more money to pay for long-lasting infrastructure investments, when interest rates are high or when they are low? 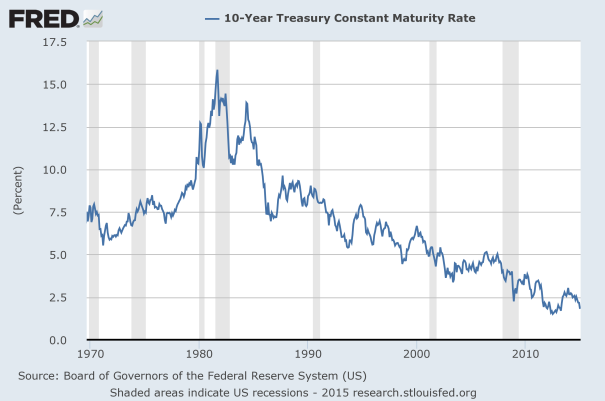 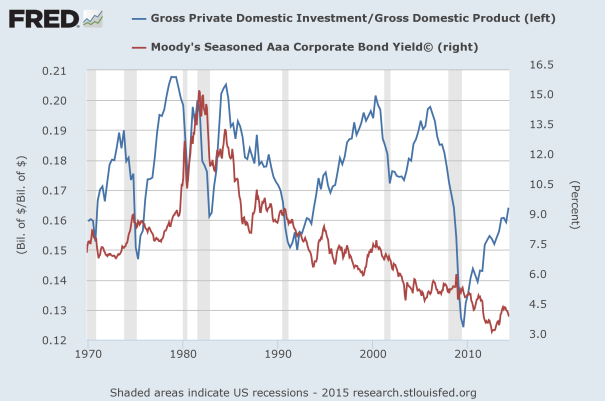 FRED
Private investment is still depressed today, but it is cannot be because of government borrowing because interest rates are so low and corporations are hoarding cash.1  Private investment is low because of the lingering effects of the financial crisis and recession of 2007 or perhaps some sort of secular stagnation problem.
1It is complicated to measure how much cash our companies are hoarding, but it is higher than usual by many measures.  Forbes magazine is a staunch defender of Corporate Power against ordinary Americans, but even when Forbes’ Jeffrey Dorfman tried to defend our corporations from critics, he to admit that American corporations have ample access to cheap cash: “With economic times being uncertain, it is no surprise that companies (and people) are holding a little extra cash. …Businesses are holding slightly more cash than usual when measured as a percent of annual sales (13 percent versus 10 percent)…”  Dorfman said that we shouldn’t count some corporate cash because it is borrowed money that they have sitting in their checking accounts.*  That just reinforces my point that there is no crowding out.  Dorfman gives the examples of Walmart and Apple each borrowing billions of dollars that is just sitting in their coffers* with no productive use.  They are just borrowing extra cash because it is so cheap for them to borrow right now.
*Ok, the money isn’t literally sitting in checking accounts or coffers like an individual might have.  It is in the corporate equivalent: liquid assets that are sitting idly on their books rather than being invested to increase productivity.
Note: This post is an update of an old blog post.