There has been a longstanding debate in America between groups that want to expand Medicare and Social Security versus groups that want to cut these enormous federal social programs. Ronald Reagan did both.  In in 1983, Reagan raised taxes to increase funding more than any other president and at the same time he cut Social Security benefits for 65-year-olds by phasing in a gradual increase in the retirement age. Today’s retirees must wait until age 67 to get full benefits. Many elites would like to do the same for Medicare.  However, cutting Medicare (& Social Security) is extremely unpopular among rank-and-file Republicans and Democrats alike.  Benjamin I. Page et al. published the graph below showing that there are 44 percentage points more people in the general public that want to expand Medicare and Medicaid than want to decrease these healthcare programs.  Wealthy elites (roughly the top 1%), have nearly the opposite opinion.  There are 19 percentage points more wealthy elites who want to cut them than expand them.

So cutting Medicare is only politically feasible if it is done in a stealthy way, by cutting it for future beneficiaries who are not presently paying attention. The most politically feasible way to do it is what Reagan did with Social Security: raise the age of eligibility.

Unfortunately, this wouldn’t reduce healthcare spending.  Although the American government could save a little bit of money by raising the Medicare age, American citizens would spend even more money than the government would save. That would increase total national health spending.  Because the healthcare lobby generally wants higher spending, it has been pushing behind the scenes to raise the eligibility age as the Washington Post reports

The Health Leadership Council, a consortium of 47 health industry leaders including Aetna, Pfizer and the Cleveland Clinic, endorsed today to raise Medicare’s eligibility age from 65 to 67…
There’s a pretty simple explanation for why hospitals and some insurers would favor raising the eligibility age: Hospitals receive higher payments from private insurance than they do from Medicare. The payments that hospitals receive from private insurers are 28 percent above the break-even point for providing treatment, according to a recent report from the Blue Cross Blue Shield Association. Medicare pays only 91 percent of what it costs a hospital to provide care.
…Heath insurers, too, could stand to benefit if 5 million seniors in that age bracket move into the private market. A number of health reform provisions — in particular the mandated purchase of insurance …would presumably push those seniors to buy health insurance rather than go uninsured.

…“This policy …simply shifts substantial costs from Medicare to other parts of government and to private and public employers.”
The Budget and Policy center estimates that if the Medicare eligibility age were raised, seniors under age 67 would have to spend $3.7 billion more in out-of-pocket cost. For many in the political system, that’s enough to reject the idea out of hand. But for some in the health-care system, that’s a profit waiting to be made.

The only age demographic where a majority consistently opposed Obamacare was Americans older than 65.  They feared that Obamacare might take resources away their socialized health insurance.  (US News lists several of the fears that senior citizens have had about it).  But it turns out that our seniors may have been right.  Now that Obamacare provides a viable alternative mechanism for insuring senior citizens, the healthcare lobby is already talking about cutting Medicare so that more people can be pushed onto Obamacare instead.  But why stop at 67-year-olds?  It would save the government even more money to completely eliminate Medicare and put all senior citizens on the Obamacare exchanges.  Indeed, House Budget Committee Chairman, Paul Ryan’s longstanding goal has been to replace Medicare with a voucher program that would use exchanges similar to Obamacare.

Raising the eligibility age for Medicare is more popular among people in the top half of the income distribution than among the poorer half, but the media mostly pays attention to the richer half because most media professionals and the politicians they report on are in the richer half.  Part of their rationale for raising the age of retirement is that life expectancy is raising the costs of these retirement programs.  But this idea would hurt the poorer half of Americans much more than the richer half because poor and lower-middle-class Americans are not living longer.  The divergence in US life expectancy in America is striking: 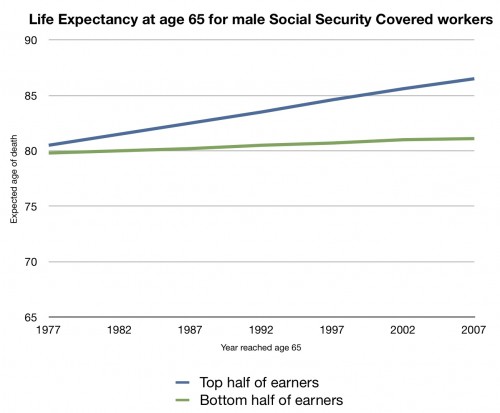 It is easier for wealthier Americans to contemplate working two more years because they are more likely to work in relatively cushy jobs that are easier to continue despite reduced physical strength in old age.  Poorer workers are more likely to have physically demanding jobs that are harder to continue past age 65.  Most people think of Medicare as being a progressive program, but it is not.  It actually redistributes from the poor to the rich.  There are two reasons why.  First, the rich live longer.

“by cheating death, the rich collect benefits longer. Secondly, the wealthy demand more intensive use of more expensive medical care. Among individuals over 85, the wealthiest 10% of the population claim nearly 40% more in Medicare expenditures than the poorest 10%.”

Proposals to raise the Medicare age would make Medicare even more regressive.  There are many other ways to cut Medicare expenditures. We could making medicare less generous for all recipients by cutting benefits a bit. For example, we could cut the drug benefit that President Bush added, but that would upset the drug lobby. Or we could reduce payouts to providers down to the levels that Medicaid pays but that would upset all the health lobbies. None of these ideas as popular as raising the Medicare age which has significant lobbyist support going for it.