Although Forbes magazine regularly  opines  that US government debt is at crisis levels, most Americans don’t seem to care these days. If we divide up the total government debt by the population and adjust for inflation (using the 2018 value of the dollar), your share of the debt is currently worth over $63,000 as you can see on this graph. For a family of four, you would owe $252,000 for your household (if we divided the debt equally)!

Although I agree with Forbes that this is bad timing to increase the government deficit, I’m not at all worried about a debt crisis for various  reasons  mentioned  earlier. I just noticed data from Thomas Piketty that provides another reason. The value of public sector assets in the United States has been rising almost as fast as public sector debt and if you subtract the total debt, the government still has an enormous net wealth: exceeds the value of public debts by a substantial margin. 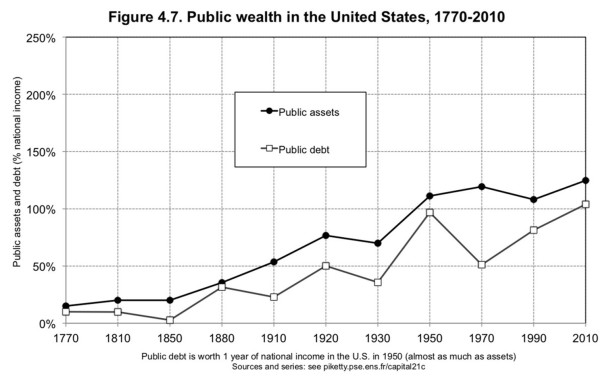 Matt Yglesias notes that the government assets are not managed optimally and could generate more money for Americans. He explains a proposal by  Matt Bruenig and others to put public wealth into a corporation that could generate higher income for all citizens. Putting public assets into a corporation would be a bit like a privatization which conservatives would like and the dividends would go to all Americans equally (like the sovereign wealth fund in Norway and the Alaska Permanent Fund) which liberals would like, so there might be support from across the ideological spectrum if only the US weren’t so darn tribalistically partisan. Add this to the list of radical ideas that will probably never become popular enough to overcome opposition from entrenched special interests.