Posted on February 8, 2019 by Jonathan Andreas — Leave a comment

Suppose you have a big import-export business in Puerto Rica located between the Caribbean Sea and the Atlantic Ocean. What countries would you want to trade with most? The most convenient locations would be the closest nations, but the closest nations are relatively poor like Haiti and the Dominican Republic. That means they don’t produce much for you to import and they don’t have much money to pay for your exports. The countries with the most money to buy your exports are the countries with the highest GDP and they also produce the most (because the P in GDP stands for Production) so they have the most goods for export too.

Most of volume of bilateral trade can be predicted if you just know the distance between the two countries and the GDP of each country using the gravity equation of trade:

In this model, Fij is the flow of trade between countries i and j. G is a constant which can be ignored for the purposes of understanding the theory. Mi is the “mass” of country i as measured by the amount of GDP. Mj is the same for country j. Dij is the distance between country i and country j. So as the distance increases, the trade flows decrease and as the GDP of either of the countries increases, trade increases too.

The gravity model helps explain why regional trading patterns stay remarkably constant over the course of centuries too. Geography doesn’t change, so the distance part of the gravity equation always shapes trade routes in the same way:

The death of distance?

Should a rich (capital-abundant) country like the US trade more with poor (labor-abundant) countries or mostly with other rich countries? For most of American history the US mostly imported and exported to other rich nations. One reason was the gravity model. Rich nations have bigger GDP and that naturally means that they tend to trade more with each other than with poor nations. Most rich nations were also spread around the North Atlantic in closer proximity than many of the poor nations of the global south. Most nations also had higher tariffs until recent decades, and the majority of the world’s poor population lived in nations that severely restricted trade due to their socialist ideologies that went out of fashion in the 1990s. Notable examples include China, the Soviet Union, India, Vietnam, and their allies in Asia, Africa, and Latin America. Most of these nations had been forced to “trade” at gunpoint by colonial powers until colonialist ideology started going out of fashion in the mid-20th century and that kind of rapacious international “trading” relationship had left them poor. They were hesitant to continue trading with former colonial masters in rich nations for decades. But that old ideology changed dramatically around the end of the cold war in 1989 and poor nations began opening up toward greater international trade. At the same time their economies began growing more rapidly.

Below is a graph of US imports of manufactured goods from developing countries as a percent of GDP that shows how rapidly the poor, developing nations expanded their share of US imports. 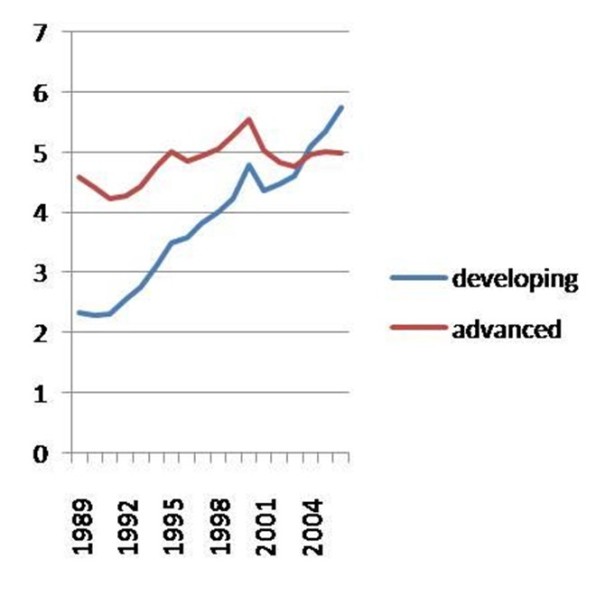 The expansion of trade with low-wage countries also had an effect on low-skilled wages in America too. Although it has been fantastic for the owners of corporations (wealthy people mostly), workers have seen wages stagnate as our largest corporations developed more flexibility to move jobs to the countries that have the greatest comparative advantage. The US added high-skilled jobs which boosted the demand for college degrees in America, but lost lower-skilled jobs which were moved overseas. The following graph shows the number of jobs that domestic corporations offshored to foreign countries (in red) versus the number of jobs that foreign corporations added in the US (in blue).

Partly due to increasing global trade with low-wage countries, median wage growth has been stagnant even though the richest Americans are getting rich so fast that they alone are boosting GDP as this graph from Marginal Revolution shows: 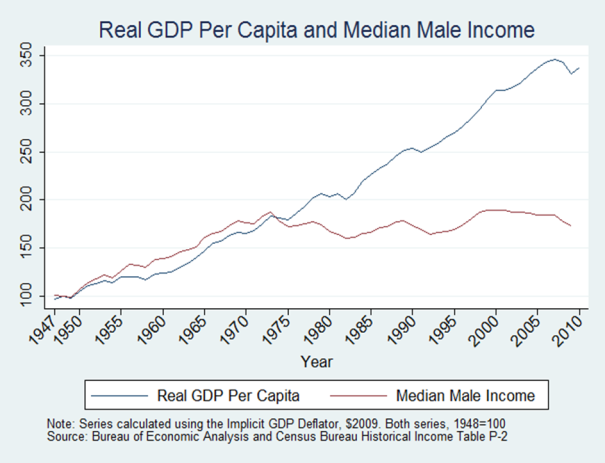 And here is an infographic examining the fall in real wages in two different professions:

Although the gravity equation predicts trade flows between nations very well just with GDP and distance, the gravity model assumes the world is a flat plane without barriers, but other geographic features matter. For example, Raballand (2003) found that landlocked countries trade about 80% less than the gravity model alone would predict due to the much higher costs of land transportation than sea transport. The entire world really is flat at sea level, but land is very lumpy.

National borders matter a lot too. If not, then a firm in Toronto, Canada would do much more business with firms in nearby Buffalo, New York than with firms in Vancouver, Canada on the opposite side of the continent, but in reality Canadian firms prefer distant Canadian customers over nearby foreign customers.

This “home bias in trade” was first documented by John T. McCallum in 1995 who found that that domestic trade was 20 times larger than international trade. This home bias has decreased according to some later estimates (partly due to NAFTA again?), but it remains a mystery why it is so large. It even exists between states within the US. For example firms in northwest Ohio do much less business with nearby firms in Indiana and Michigan than with more distant firms on the other side of Ohio.

The home bias is one reason why large nations like the US have lower trade as a percent of income than small countries like Singapore.  Singapore exported 173% of GDP in 2017 whereas the US only exported 12% of GDP.  Small countries can’t afford to have much home-country bias because they don’t have enough size to reach economies of scale in very many industries and so they import most of what they use and export most of what they produce in cases like Singapore.

A related puzzle is the “equity home bias” with refers to the fact that people own much less foreign equity (stocks) than would be ideal in their investment portfolios.

Again, the same effect is true within American states. People tend to invest more money in companies based in their home state than is ideal for their own wellbeing. The most extreme version of this is the fact that many people irrationally buy too much stock in the very company where they work. That is the very worst company to invest in unless you have insider information and even then, insiders should be just as good at using their insider information to sell their own stocks as to buy it, so insider information should not cause people to buy and hold the stock of their employer.