TV news reporter Ty Batemon interviewed me today for a WLIO segment in response to a recent AP article by Hope Yen that has the ridiculous, meaningless headline, “4 in 5 in USA face near-poverty, no work“. This is meaningless because it does not measure true hardship nor do we know if this measure is getting better or worse.  Like most people with doctorates, I was in poverty during graduate school, but that is nothing like the hardship of involuntary poverty due to illness, layoffs, or family breakdown.

Even more objectionable, the article misleadingly emphasizes white poverty over poverty among other races.  The article claims that,

“Hardship is particularly on the rise among whites, based on several measures. Pessimism among that racial group about their families’ economic futures has climbed to the highest point since at least 1987… ‘There is the real possibility that white alienation will increase if steps are not taken to highlight and address inequality on a broad front’… ‘[Working class whites] feel that politicians are giving attention to other people and not them'”.

But this is misleading.  There is no “particular” rise in hardship among whites.  Some data shows that the recession was much harder on minorities than on whites. White pessimism has risen relative to other races, but that is not an objective economic hardship.  Economic hardship, as measured as a decline in income, is broadly similar among racial groups.  Median income moves fairly much in parallel for all races. 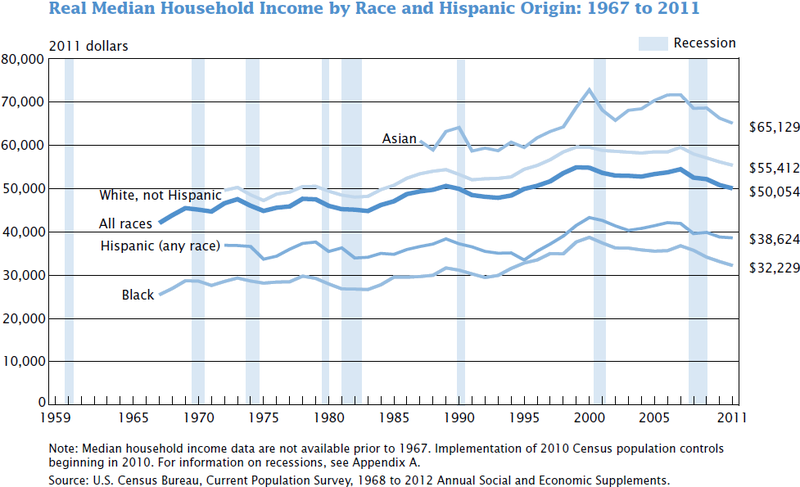 In the long run, other races have been catching up relative to whites, but most of that catch up happened in the first decades after the civil rights era, not since the great recession of 2008 as the AP article implies.  This was already clear way back in 1978 when William Julius Wilson published The Declining Significance of Race to show that “economic class has become more important than race in determining job placement and occupational mobility.” (pdf)  Although William Julius Wilson is a firm supporter of race-based affirmative action, his research suggests that class-based affirmative action might be more appropriate today.

The AP article demonstrates that, “‘[Working class whites] feel that politicians are giving attention to other people and not them'”.  Both the article and some of the responses to it on the web shows demonstrate white resentment against anti-poverty programs that they see as taking their money and giving it to other races.

The AP article also says that, “wealth is a greater predictor of standardized test scores than race; the test-score gap between rich and low-income students is now nearly double the gap between blacks and whites.”  This reinforces what I argued earlier. We should replace race-based affirmative action with a class-based system because it will create more political unity to help more people in need.  It creates outcomes that are almost as beneficial for African-Americans as our current race-based system and some of the few minorites who would lose from the switch to class-based affirmative action are rich enough that they really don’t deserve help anyhow compared with someone in poverty.  Finally, class-based programs are potentially more beneficial to minorities if they help reduce the racial stereotype vulnerability that is perpetuated by the race-based system.