Secular Stagnation of The Median

Secular stagnation is a concept that Alvin Hansen developed after nearly a decade of Great Depression in the US because he feared that the stagnation could continue forever.  Then WWII brought the biggest government spending stimulus in history and the depression abruptly ended.  No industrialized nation faced that kind of prolonged stagnation until Japan in 1990, but outside of Japan, most economists continued to ignore the economics of secular stagnation until the Great Recession of 2007 which has been worse in most of Europe (as officially measured by GDP, so take that with a grain of salt) than the Great Depression.  The term, ‘secular stagnation’ has nothing to do with the religious definition of secular, but with a somewhat archaic definition of secular as used in statistics which means “going on from age to age; continuing through long ages.”

as the secular stagnation conversation has intensified its empirical motivation appears to have waned. In the 10 months since Summers’ initial secular stagnation talk, the unemployment rate has fallen from 7 percent to 5.9 percent. The number of job openings has steadily risen as well. In other words, while nobody is exactly thrilled with the state of the American labor market, the situation does seem to be improving. It may be, in other words, that we have suffered through a prolonged and painful period of excessively low demand that is slowly but surely ending, rather than an endless depression.

This is somewhat true for the US, but the US economy is still far more stagnant than most people would have predicted back before the financial crisis in 2007, and the rest of the industrialized countries (Europe and Japan), still look like textbook secular stagnation.  More importantly, the textbook definition of stagnation is wrong because it looks at mean GDP rather than the median.  The majority of Americans are still mired in stagnation because the real median income plummeted during the recession and then flat-lined.  For example, the Social Security Administration just released its estimate of median individual wages for 2013 which shows it is still down 0.6% from 2011 (adjusted for inflation) and 4% below its peak in 2007.  If you earn more than $28 thousand dollars per year ($14/hr full time), you are doing better than the majority of American workers. 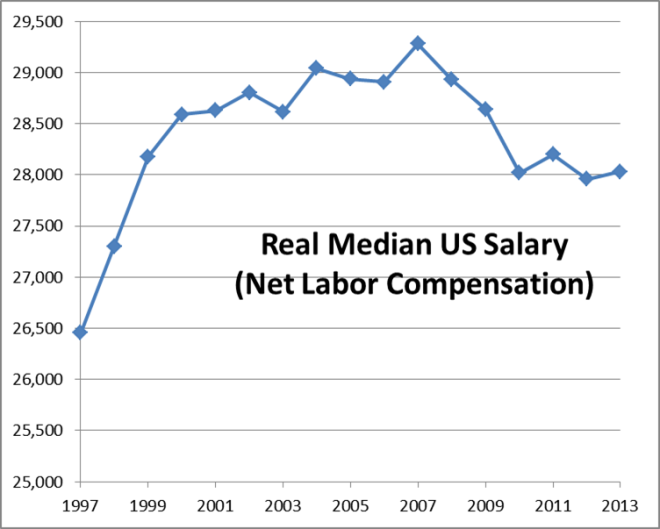 The mean salary has risen more than the median salary, but the big rise in inequality is due to rising wealth of the top 1% richest Americans that does not show up in statistics about wage income.  As Paul Krugman recently pointed out, most Americans get very little income from investments.  You can get some idea of the disparity by comparing GDP per capita with median salary info: