Ending The Tyranny of Temperate Climate

Posted on December 14, 2015 by Jonathan Andreas — Leave a comment

Humans co-evolved with our technological inventions for warming up in the cold: fire, shelter, and clothing.  Our large brains would not work without the precise temperature regulation provided by our nearly furless skin.  Even the remnant fur on our heads is there to insulate the most temperature-critical body part by shading it from intense sun and warming it from the cold while the naked skin on the rest of our body can radiate out the enormous heat created by our brains.  Although our brains are only about 2% of body weight, they generate 20% of the heat of our bodies and they don’t work well if they overheat.  Brains must be kept within a very narrow temperature range to work correctly. Because human skin is built to eliminate heat, humans have needed heating technologies to survive even moderate cold snaps: fire, shelter, and/or clothing.

Humans began pre-digesting their food outside of their bodies using a technology we call cooking.  This was necessary to allow them to develop the most energy-intensive organ, the brain, without needing to have an enormous stomach and spend half the day constantly chewing to fill it.  Humans have extremely tiny jaws and stomachs compared with the rest of our bodies because our ancestors figured out how to make food more digestible and energy-dense.  The great apes that are our closest biological relatives spend 4-7 hours every day just chewing their food and they would spend much more time chewing if they needed to feed human-size brains.

Whereas humans have always had technologies for warming up, it was not until the 1950s that humans had an equally reliable technology for cooling down when trying to work in a place that is too hot.  And cooling down is crucial for our brains to function well.  Witness our naked bodies for evidence.  Before the air conditioner, people could not work when the weather gets too hot.  They were forced to siesta during the heat of the day or migrate into the cool of the mountains during hot seasons.  Here is an estimate from NOAA of how much less time humans can do physical labor outside in the tropics compared with temperate zones:

By their estimate, people in the tropics can’t spend as much time doing physical labor as in the temperate zone where people can spend roughly 50% to 300% more time working. The bottom graphs shows that this would get much worse with 3 degrees of global warming.

Our hunger-gatherer ancestors didn’t need to spend much time working, so the heat of the topics wasn’t much problem in that era, but industrialization requires long work hours and hot factories forging metals and other hot processes. Even early computers gave off massive amounts of heat.  Industrialization was difficult particularly difficult work in hot climates before the air conditioner.

Tragically, the idea for mechanically cooling living space was already invented in the 1840s by John Gorrie.  Unfortunately, he was unable to get financial backing and died bankrupt.  He marketed it as a remedy for malaria and yellow fever because he believed in the common theory of the day that malaria was caused by bad air (which is literally what the word ‘malaria’ means) and he believed that cooling the air could keep the poisonous gasses away.

Perhaps his idea was ahead of its time, but he might have just been targeting the wrong market.  He might have been more successful if he would have marketed it for industrial and luxury markets because that is how  Willis Carrier succeeded when he reinvented the air conditioner a second time in 1902.  He initially found success selling them to printing and textile factories to stabilize the humidity that wreaked havoc with production and that focus on humidity is why they got the name air conditioners rather than air coolers. Nobody tried using them to cool the air merely for human comfort until the first residential unit was installed in 1914 in Minnesota (of all places) and they became popular in the 1930s in movie theaters and finally revolutionized life in the sunbelt in the 1950s as the technology improved and costs dropped.

If the automobile is the invention that revolutionized 20th-century geography the most, the air conditioner should come in second place.  Rebecca Rosen explains:

During the Depression, few places could afford to install the systems, but one venue saw returns on such an investment: movie theaters. The air conditioning in theaters became an attraction in itself, and people flocked to them. Not coincidentally, what many consider Hollywood’s Golden Age began around the same time.  [How much of the early success and growth of Hollywood is due to the growth of the air conditioner?]

…Many of the central changes in our society since World War II would not have been possible were air conditioning not keeping our homes and workplaces cool. Florida, Southern California, Texas, Arizona, Georgia, and New Mexico all experienced above-average growth during the latter half of the 20th century — hard to imagine without air conditioning. In fact, the Sunbelt’s share of the nation’s populations exploded from 28 percent in 1950 to 40 percent in 2000. And hubs of business and technology in hot regions of the globe, such as Dubai, may never have taken off…

The advent of air conditioning has shaped our homes and family life as well. Houses are designed not for ventilation but for central cooling systems. Porches, where they exist, are relics of another age, and few new homes include them. Families gather inside, in the comfort of 72-degree living rooms, to watch TV. Would television have even gained its central place in American family life, were the rooms from which we watch it not so enjoyably cool?

Glass skyscrapers would not exist without air conditioning.  Before 1950, skyscrapers were built without large, open floorplans because architects didn’t think that they could rent out space that was more than 25 feet from an openable window.  Access to windows limited the footprint of early skyscrapers.

Today there are no openable windows in large new buildings.  The largest skyscrapers even have to use their air conditioners in the winter because they have so little surface area relative to their volume which contains numerous heat sources including humans and computers.  Even when it is 5 degrees outside, when the sun comes through an expansive solid glass wall, the sunny side of the building still needs cooling.  Rebecca Rosen:

Before air conditioning, in a bygone and surely less comfortable era, people employed all sorts of strategies for keeping cool in the heat. Houses were designed with airflow in mind — more windows, higher ceilings. A style once prevalent in the American south, the dogtrot house, was really two smaller cabins — one for cooking and the other for living — connected under one roof with an open-air corridor between them. In addition, many homes had porches where families could spend a hot day, and also sleeping porches with beds where they could ride out a hot night. Many home designs took passive solar design principles into account….

Besides housing design, people had other tricks: taking naps during the heat of the day, carrying hand-held fans around, and, of course, swimming. My grandmother told me she used to pay a bus fare and sit on the open, upper deck for hours, riding all around the city.

The southern US has been the poorest region for all of American history, but it has been growing faster and catching up.  Undoubtedly one reason it was poorer was that it was too hot for most of history and one reason for its catch-up growth is air-conditioning. Ed Glaeser found that the two main factors that are correlated with regional population growth in the  US after 1960 are warmth in winter and the prevalence of college educated workers.  Once the air conditioner became widespread, the South became the fastest growing region of the US .

The Cleveland Fed made a graph showing how the air conditioner contributed to shrinking cold-weather cities and growing hot-weather cities:

Tatyana Deryugina and Solomon Hsiang find that hot days are bad for the economy — not just in poor countries with an overwhelmingly agricultural workforce, but in the United States of America. Here in the US, “productivity of individual days declines roughly 1.7% for each 1.8°F increase in temperature above 59°F.” That means that “a weekday above 30°C (86°F) costs an average county $20 per person.”

…Hot days kill growth both because of negative impacts on agriculture and because it seems that, despite air conditioning, people simply work less efficiently when it’s hot. …Extreme cold is unpleasant, but as a society we can live through it and even thrive. Extreme heat saps our will to live in a more fundamental way, crushing the economy and driving long-term immiseration.

Michael Sivak, …compared Minnesota’s largest city (and the coldest major metro in the U.S.) with Miami (our warmest metro on average), looking at the energy it takes for the two just to keep themselves at livable temperatures.  Minneapolis – just talking here about heating and cooling – is three-and-a-half times as energy demanding as Miami,…

The ideal temperature inside your home is considered to be about 21 degrees Celsius (or 70 degrees Fahrenheit), the point at which you’d probably be perfectly comfortable without heating or cooling. But researchers look instead at the benchmark of 18 degrees Celsius, because humans naturally heat a house a few degrees just by living in it (and running the shower and cooking dinner).

“Think of it this way,” Sivak says. “Let’s say you would like to have 70 degrees indoors. Think of how cold it can get in Minneapolis or Chicago or Ann Arbor. It can get down to zero.” But on a really hot day in Miami, maybe the temperature tops out at 100. It takes a lot more energy to heat a room by 70 degrees than to cool a room by 30. In fact, it takes more energy to heat a room by one degree than to cool it by the same amount. And the typical air conditioner is about four times more energy efficient than the typical furnace or boiler.

Before the air conditioner, heat waves were deadly in the US.  Now they are more of a mere annoyance that keeps people inside. 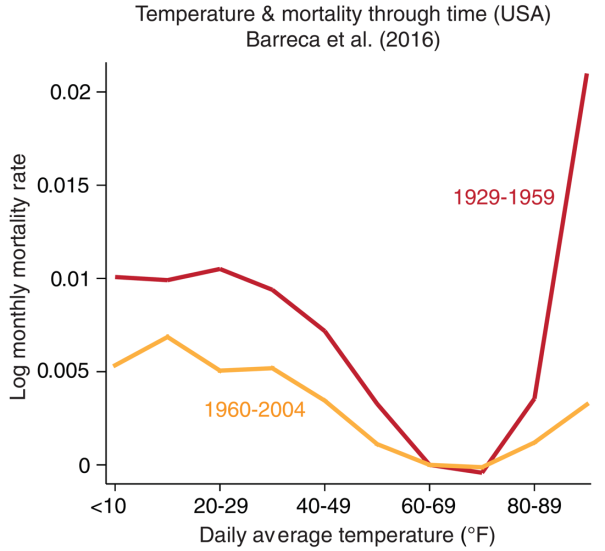 The above graph shows that before the air conditioner (red line), heat waves caused mortality spikes.  Since 1960, relatively few Americans have been unable to escape the heat and have had problems.  Because most Indians are too poor to afford air conditioning, they still have mortality spikes during heat waves. 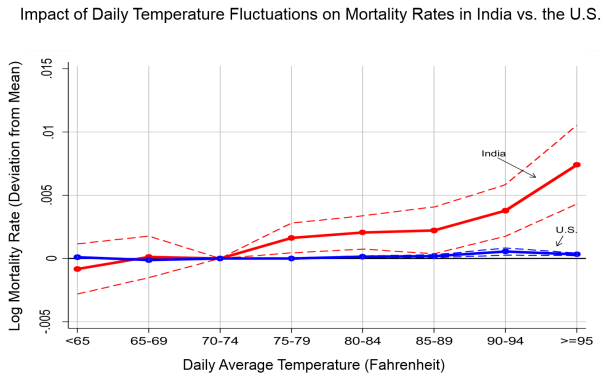