Home › Macro › Why do stocks rise faster than incomes? Is that a good thing?

Why do stocks rise faster than incomes? Is that a good thing?

Posted on December 18, 2015 by Jonathan Andreas — Leave a comment

The US stock market has had faster long-run growth than US incomes (GDP).  The FRED graph below shows data for a little more than a half century, but stock values have historically grown considerably faster then incomes since the beginning of the US stock market in the late 1700s.

Stock values went from about 40% of total national income in the mid 1970s to an average of about 130% over the past two decades. Going even further back, the stock market was an even smaller fraction of total income.  It was only 16% in 1942. The famously irrational stock-market bubble highs of 1929 only briefly brought it up above 60%.  That would be a disastrously low stock market value by today’s standards–lower than the famous crash of 2008. 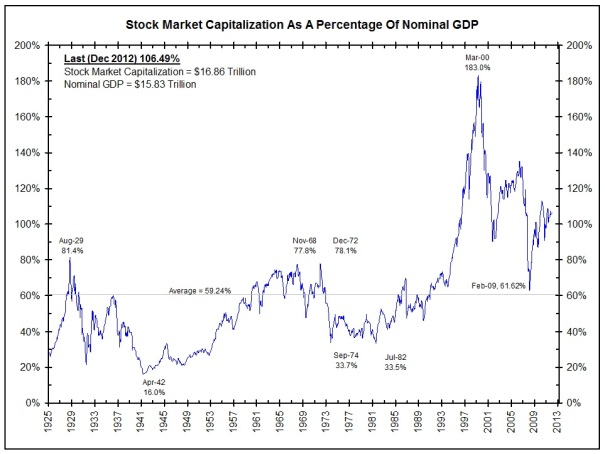 The fundamental value of a share of stock is the net present value (NPV) of all future income that the stock will earn.  That means that stocks should rise in value when the interest rate (a.k.a, the discount rate) falls.  Interest rate variations should account for much of the short-run variation in stock values, but it cannot account for the long-run increase in value over centuries. The US stock market can also grow faster than US income as long as corporate America takes over more and more of the American economy.  When expected profits rise, the stock values rise.  Nick Hanauer points out that this has been happening:

After-tax corporate profits have doubled from about 5 percent of GDP in 1970 to about 10 percent, even as wages as a share of GDP have fallen by roughly 8 percent.

If corporations were able to take over the entire US economy, then the stock market would only be able to rise at about the same rate as GDP long run because all capital income would then be captured by corporations.

Once corporations run the entire US economy and all capital income is earned by corporations, at that point the only way for the stock market to rise faster than GDP would be for corporations to boost their profits at the expense of wages.  If corporations could continue growing by reducing wages, that would lead to the second scenario where corporations eventually enslave labor and cease to pay wages whereupon all income is corporate income.

At least until the early 1970s, the corporatization of America was a good thing overall because corporations have brought greater efficiencies by destroying millions of small businesses and taking over their markets.  For example, there used to be hundreds of small family-run American car manufacturers in the late 1800s that ultimately were taken over by three big US automobile corporations that still exist today.  Retail used to be the exclusive domain of small ma & pop stores, but has been consolidating into ever larger retail corporations like Walmart and Home Depot.  This process was beneficial for most Americans until the early 1970s, because growing US corporations shared their increased efficiency with their workers whose real wages rose dramatically.

In particular, 1941-1968 was a time when there was a rising ratio of stocks/GDP without increasing inequality, so a rapidly rising stock market can be good for ordinary Americans. However, since the 1970s, real wages have stagnated and the labor share of total income has declined.  For some reason, the profits of increased corporatization in the 1980s and 90s failed to trickle down.  Corporations continued to boost American output, but the increased productivity disproportionately benefited a wealthier minority of Americans.

I predict that information technology will continue to create economies of scale that will continue the corporate takeover of the American economy.  This could be a good thing if the increased income is shared with the people doing the work and ordinary Americans get higher wages rather than the money just going to shareholders, because most stocks are owned by elites and when the stock market rises faster than incomes, it increases inequality without benefiting the median American.  But recent history doesn’t give much reason for optimism.