Home › Medianism › The average Canadian became richer than the average American a decade ago.

The average Canadian became richer than the average American a decade ago.

Posted on January 2, 2019 by Jonathan Andreas — Leave a comment

Most people think that most Americans are richer than Canadians because that was true for most of history, but that ended a decade ago.  The Great Recession of 2008 hurt Americans more than Canadians and the median income in Canada has been higher than in America ever since 2009. The following graph shows the Global Consumption and Income Project‘s estimate of median income in both countries (using PPP):

Most people still don’t realize this is true because most people use mean income as THE measure of economic well being. The story looks different when using mean income:

Mean income is still a bit higher in the US than in Canada due to rising inequality in the US.  America’s billionaires have been doing better than Canada’s and they pull up average income, but the average American hasn’t done so well.

Here is what happened to inequality in the US vs. Canada as measured by the ratio of mean income to median income.  The rising ratio in the US shows higher inequality whereas inequality is now lower in Canada than it was at the beginning of this data set. 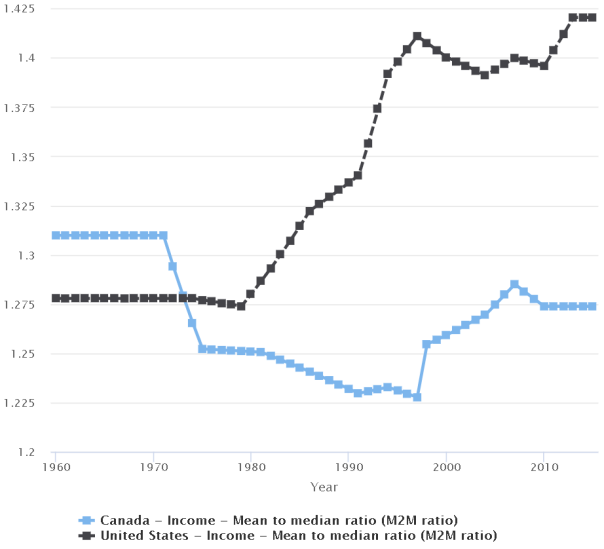 Partly because of lower inequality in Canada, economic opportunity is higher there and Canadians are twice as likely to achieve the American Dream than Americans according to Fortune Magazine:

Stanford Economist Raj Chetty’s study, Improving Opportunities for Economic Mobility: New Evidence and Policy Lessons, published by the St. Louis Federal Reserve Bank, defines the “American Dream” as the statistical probability that a child born to parents in the bottom fifth on the income distribution scale ends up in the top fifth.

Children in the United States have a 7.5% chance of achieving that economic mobility, according to the study. By comparison, Canadian children have a 13.5% probability.

Chetty’s research shows that some areas have much higher economic opportunity (like San Jose California) than other areas (like most of the former slave states, and, sadly, my home state of Ohio). 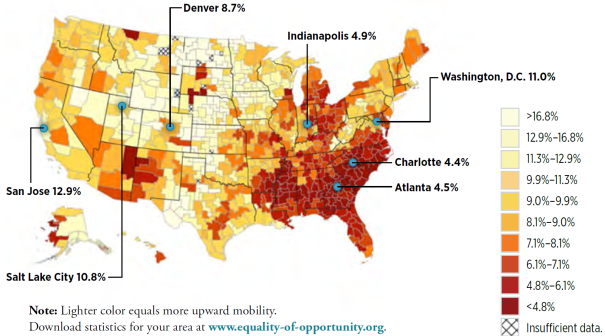