Home › Health › The math behind whether condoms cause teen pregnancy

The math behind whether condoms cause teen pregnancy

Via Sarah Kliff, I see that a new research paper found that schools giving out free condoms had a 10 percent increase in teen births.  This is contrary to the past studies I have seen which show that free birth control led to fewer pregnancies and abortions.  But the new study is convincing because it uses a large data set.  The authors give three hypotheses for their surprising result:

Could theory #1 be true?  Could free condoms cause orgies which in turn causes an increase in pregnancy rates?  A little math and common sense demolishes the theory.  Condoms significantly reduce the risk of pregnancy and so the only way condom use could increase pregnancy is if they caused an even greater increase in sexual activity.  For example, although condoms reduce the risk of pregnancy by more than 50%, and even at that low level of effectiveness, teens would have to double the amount of sexual activity to just cause the pregnancy rate to break even (because 50% is half and if you take half of a doubling, you get right back to where you began).  Even at that extremely low-level of effectiveness, condom-using teens would have to increase their sexual activity levels by 120% in order to see a 10% increase in pregnancy and that is a truly epic change in sexual behavior, the likes of which have never been documented in a large population of kids over such a short time.  All the empirical evidence indicates that the demand for sexual activity is quite inelastic.  For example, one study in LA found approximately zero change in sexual activity due to free condoms.  Nearly half of US high school students have not had sex and the presence of free condoms doesn’t make or break their decision.  Similarly, the other half of students were already having sex before they got free condoms and condoms are hardly an aphrodisiac that dramatically increases sexual appetites.

If schools had distributed highly effective contraception like IUDs, they would have definitely seen reductions in pregnancy.  IUD’s are 99.7% effective per year which means that they must reduce the risk of each sexual act by more than 99.9%.  IUD users would have to increase their sexual activity more than a thousand fold in order to increase their pregnancy rate relative to unprotected sex! 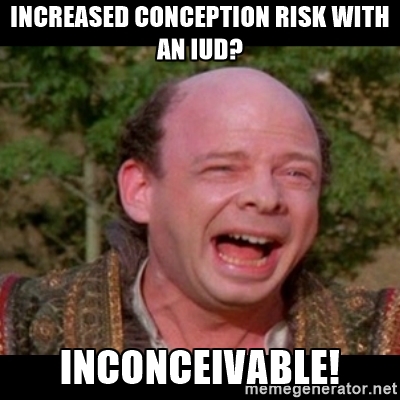 It is similarly inconceivable for condoms to increase sexual activity enough to increase conception rates.  I’ll be looking forward to further research to learn more about what caused the increase in pregnancy in the schools with free condoms.  I’m betting it was a combination of theories #2 and #3, but I bet I’ll be hearing more editorials about theory #1 because it was already a meme with a strong appeal to some people even though there is no evidence for it.

Note that because IUD’s are 99.7% effective per year, they are extremely disappointing for about three of every thousand IUD users every year when they get pregnant. If you Google “IUD pregnancy rate” to find how effective IUDs are, you will see lots of stories claiming that IUDs aren’t at all effective because someone got pregnant, but no reversible method is more effective and the authors of these stories seem to mentally round up from 99.7% to 100%, but even tubal ligation isn’t 100% effective.  There isn’t any reverseable birth control that works significantly better than IUDs and hormonal implants.  Even abstinence has a much worse record because people who try abstinence fail at a much greater rate than IUD users.  In theory abstinence would work 100% if people were good at using the method, but in practice, abstinence has such a high failure rate that it should be considered a supplementary method for the average person.  Similarly, condoms are over 97% effective IF they are used correctly, but in practice condom users tend to use them imperfectly out of ignorance or sloppiness and their failure rate tends to be very high.  The above study shows that high school students who get condoms without any counselling have particularly high pregnancy rates.