universal health care is both desirable and possible, even in low-income countries. Some countries achieved near-universal coverage when they were still relatively poor. Japan reached 80% when its GDP per person was about $5,500 a year. More recently, several developing countries have shown that low income and comprehensive health care are not mutually exclusive. Thailand, for example, has a universal health-insurance programme and a life expectancy close to that in the OECD club of mostly rich countries. In both Chile and Costa Rica income per person is roughly 25% of that in the United States and health spending per person just 12%, but life expectancy in all three countries is about the same. Rwanda’s GDP per person is only $750, but its health scheme covers more than 90% of its population and infant mortality has halved in a decade. “Ebola would not have happened there,” says Dr Barrie.

Healthcare is usually an example of a good that is produced more efficiently when it is more equally distributed. For example Ebola only spread in countries that lacked the kind of basic healthcare facilities that even nations as poor as Rwanda can afford if they are trying to make healthcare equitable. That makes everyone better off and can boost economic growth too.

It is becoming increasingly clear that better health can lead to higher incomes, as well as the other way around. Economists at the World Bank used to call spending on health a “social overhead”, but now they believe that it speeds up growth, says Timothy Evans, one of its senior economists. A study in 2011 carried out by the University of St Gallen looked at 12 European countries between 1820 and 2010 and found a close link between the expansion of health care, a fall in mortality rates and growth in GDP per person. Another study found that in Britain as much as 30% of the growth in GDP between 1780 and 1979 may have been due to better health and nutrition. A paper by two leading economists, Dean Jamison and Lawrence Summers, found that 11% of the income gains in developing countries between 1970 and 2000 were attributable to lower adult-mortality rates.

The US is the least efficient nation at producing health care partly because the US is the only rich nation that does not guarantee universal health care to all our citizens. Even China was close to surpassing the US back in about 2008 according to the Economist’s graph and Mexico has been rapidly catching up. If they can do it, the US can too 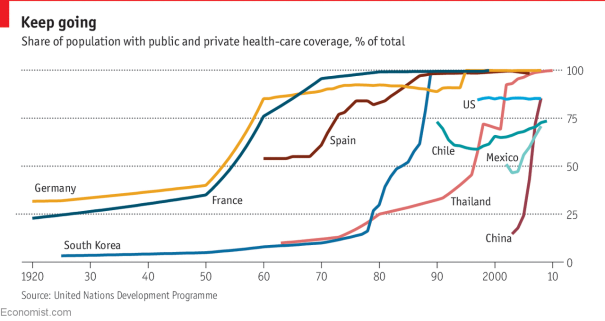