Violence has been declining globally. Consider lynching in America.

Posted on January 31, 2021 by Jonathan Andreas — Leave a comment

Tuskegee University researchers looked for records of lynchings in newspapers published between 1882 – 1968 and generated this chart. The orange color are victims whose race is unknown. This isn’t a complete account of lynching victims. It is only a count of the ones that were recorded by newspapers and which were reviewed by the Tuskegee researchers. There were many more. For example, the Lynching in Texas project of Sam Houston University found public records of over 100 additional lynching victims in that state alone that Tuskegee had missed.

Tuskegee’s “white” category should be labeled “non-Black” because it also included Mexicans, Native Americans, Chinese, Jews, and Catholic immigrants. The KKK was rabid against Catholic immigrants and did not consider them white.  According to the Tuskeegee dataset, Texas lynched by far the most non-Black people, but most of them were Mexican-Americans according to the Lynching in Texas project. Many whites were lynched in Western states, and in the South there were also 148 black-on-black lynchings, 200 cases of white-on-white lynchings, and four incidences of black mobs killing whites recorded between 1882 and 1930.

The graph paints a picture of lynchings being common practice for meting out vigilante ‘justice’ against many races in 1882, but lynching soon morphed into a technique that was primarily used to terrorize Blacks in the South by 1900.

Lynching was such a celebrated part of life that participants paid professional photographers and made commemorative postcards to send to friends and family as you can see below. Photography was extremely expensive in at the time and was only afforded for commemorating particularly special occasions. Time magazine noted:

Even the Nazis did not stoop to selling souvenirs of Auschwitz, but lynching scenes became a burgeoning subdepartment of the postcard industry. By 1908, the trade had grown so large, and the practice of sending postcards featuring the victims of mob murderers had become so repugnant, that the U.S. Postmaster General banned the cards from the mails.

Naturally, given that lynchings were accepted as normal, nobody was punished for participating in a lynch mob. Arthur Raper investigated nearly one hundred lynchings and estimated that, “at least one-half of the lynchings are carried out with police officers participating, and that in nine-tenths of the others the officers either condone or wink at the mob action.” Despite being sanctioned by law enforcement, Arthur Raper’s study estimated that approximately one-third of the victims were falsely accused. Some mobs didn’t even correctly identify the person they lynched.

Lynchings were sometimes announced in newspapers to draw crowds and to give photographers time to prepare their equipment. Some attracted up to 15,000 people. Schools were sometimes cancelled and railroads sometimes ran special excursion trains to accommodate spectators. The photo below shows Jesse Washington, “a 17-year-old retarded black child“, who was killed by a crowd that was estimated at over 10,000 in Waco Texas in May 15, 1916. 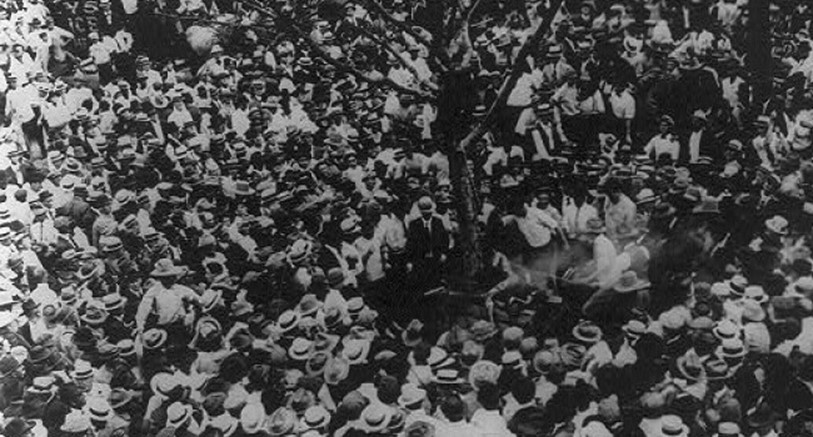 They mayor initially resisted the mob which threatened to hang him for doing his job and trying to protect the unconvicted man. The lynch mob put a rope around the mayor’s neck and set the courthouse on fire in retaliation. Here is a later photo of Jesse Washington’s corpse showing a smiling youth among the people posing for a professional photographer behind Jesse’s charred remains. 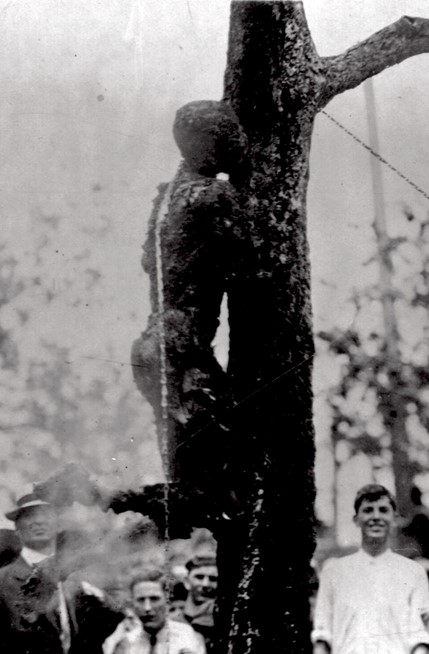 Below is a postcard reading, “George and Ed SILSBEE HANGED by a MOB of CITIZENS IN FRONT OF JAIL. Jan. 20, 1900. Fort Scott Kan.” The back of the postcard advertised the photography studio that took the photo: J.V. DABBS PHOTOGRAPHER GROUND FLOOR STUDIO, Frames and Mouldings, 407 Market Street. FORT SCOTT, KANSAS. 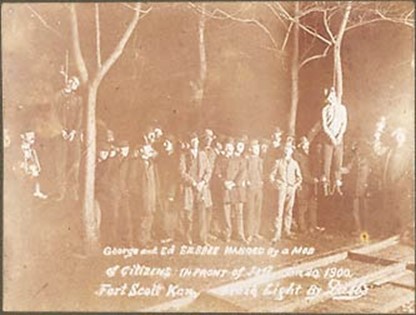 This shows a mother and her fifteen-year-old son who were tortured by being dragged for miles before being hung for this commemorative postcard in Okemah, Oklahoma, in 1919. 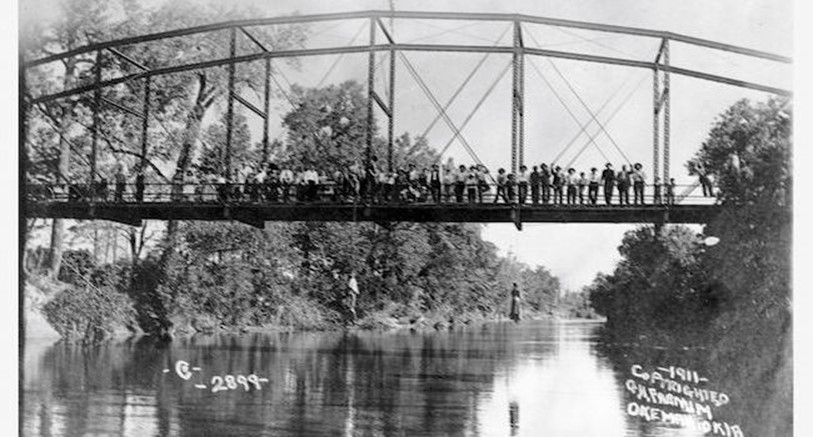 Close to my home, Sheriff Sherman Eley was assaulted by a mob for not giving up the location of a Black man who was in custody.  Sheriff Eley’s home was ransacked, his sick infant daughter was taken as a hostage, and he was beaten to unconsciousness and suffered cuts and broken ribs.   The mob put a noose around his neck in downtown Lima and started to hang him, but a colleague stepped in and convinced Eley to tell where the ban was being held and he relented and told them that the Black man was being held at the Putnam County Jail.  The mob then drove to the Putnam County Jail, which would have likely been about an hour drive on the bumpy roads of the day.

They kidnapped Eley and took him with them, tied spread-eagle across the hood of a creamery truck they had commandeered.” Eley, “vomiting and slipping in and out of consciousness,” remembered little of it

Meanwhile the prisoner had been moved to Toledo and Eley escaped the mob.  Eley’s daughter Doris died soon thereafter. That was the last attempted lynching in Ohio, shown below. 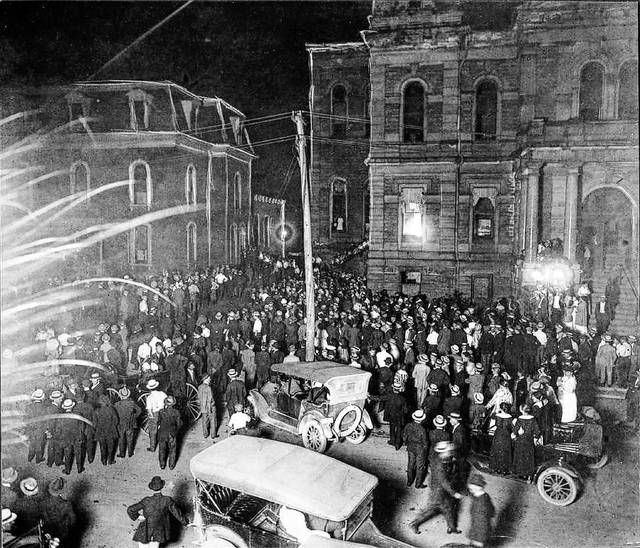 My colleague, historian Perry Bush, researched this event and when the Lima News published a story about it in 2017, he learned that descendants of the people in the story had never heard anything about it. He also received a call warning him that some local people were offended and were threatening his safety, so the event was still raw a century later.

The photo below shows well-dressed members of an Omaha, Nebraska lynch mob posing around the body of black man named Will Brown in 1919. The mob also attempted to hang the mayor and nearly killed him because the mob had been egged on by a rival political party that was stoking racial animosity in order to gain political power and defeat the mayor. Somewhere between 5,000 and 15,000 people participated in the lynch mob which also poured gasoline in the courthouse and lit it on fire and shot seven police officers in the frenzy of the lynching. Nobody served any term of imprisonment. 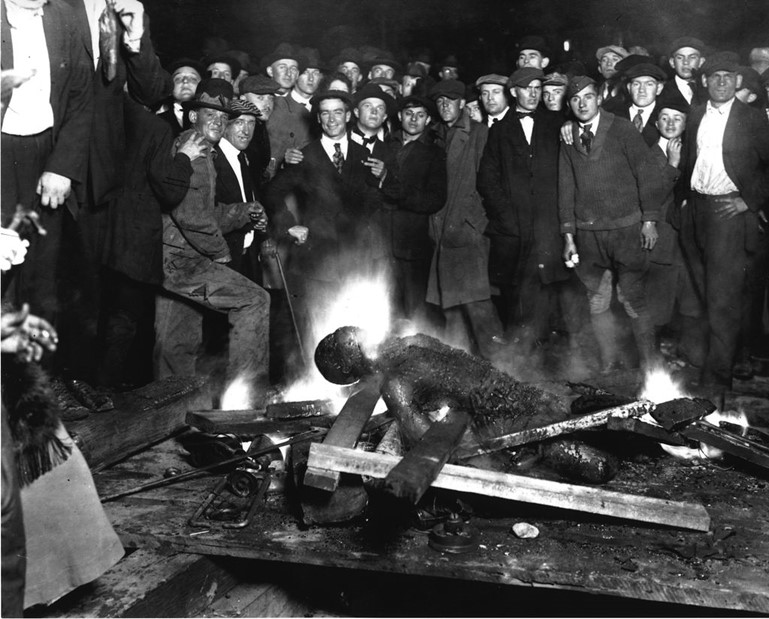 This kind of violence had probably been going on for centuries so the big question is why has it become so much rarer in the past century. Although there is less documentary evidence going farther back into the mists of history, there is still plenty of evidence for public executions and mob violence. The Salem witchcraft trials, the Boston tea party, and on and on. Steven Pinker has done the most thorough analysis of the decline in violence over the centuries. The world is much less violent today along most dimensions. For example, America is MUCH less likely to execute people.

in the United States in the 17th and 18th centuries, the death penalty was prescribed and used for theft, sodomy, bestiality, adultery, witchcraft, concealing birth, slave revolt, counterfeiting, and horse theft. We have statistics for capital punishment in the United States since colonial times. As you can see, in the 17th century a majority of executions were for crimes other than homicide. In current times, the only crime that is punished by capital punishment other than homicide is conspiracy to commit homicide. 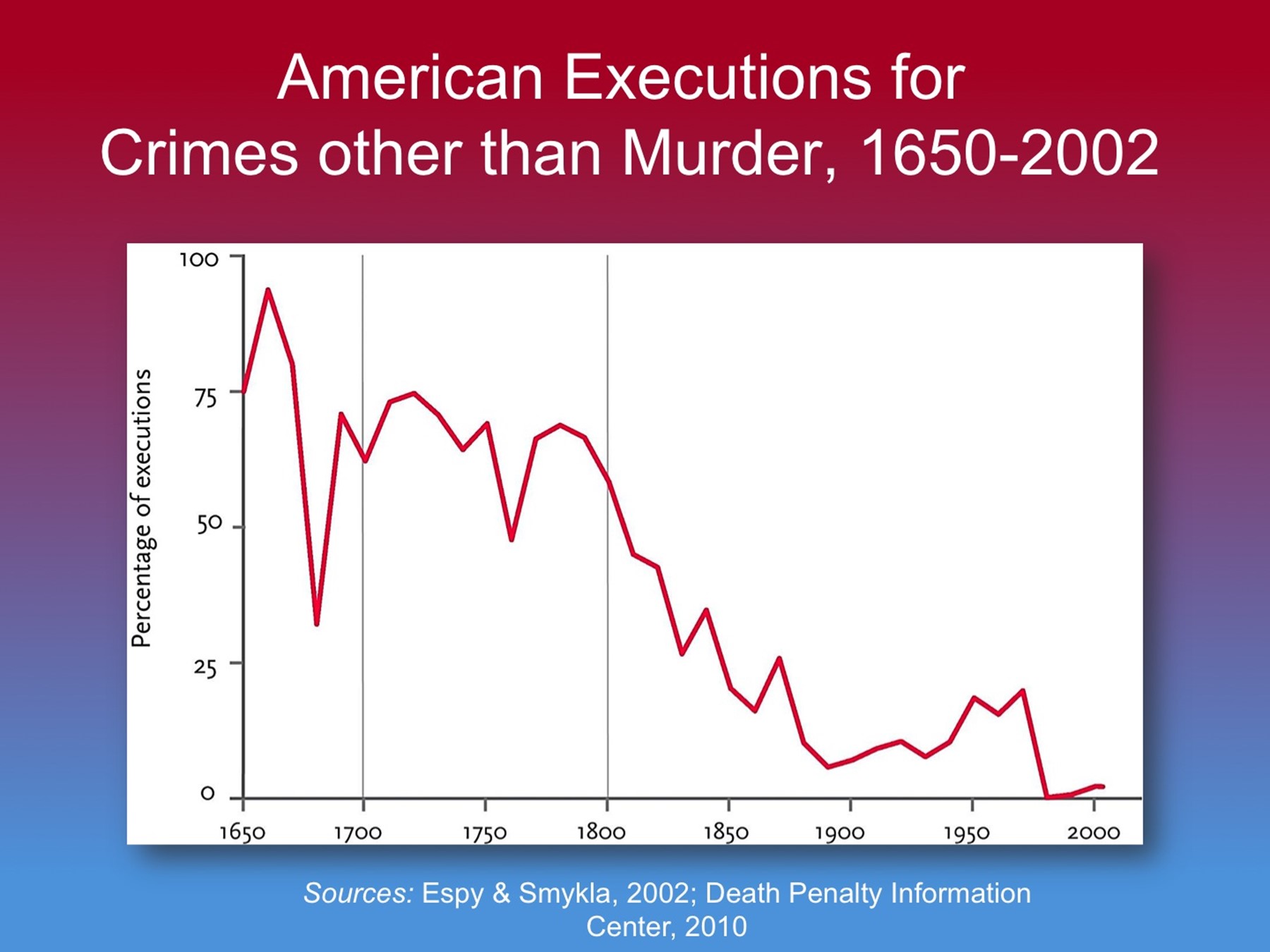 The death penalty itself, of course, has been abolished in most of Europe… Currently, only Russia and Belarus have it had on the books.

But interestingly, even before capital punishment was abolished by the stroke of a pen, it had fallen into disuse. You can see that the percentage of European countries that actually carry out executions has always been far lower, and the decline began much earlier. 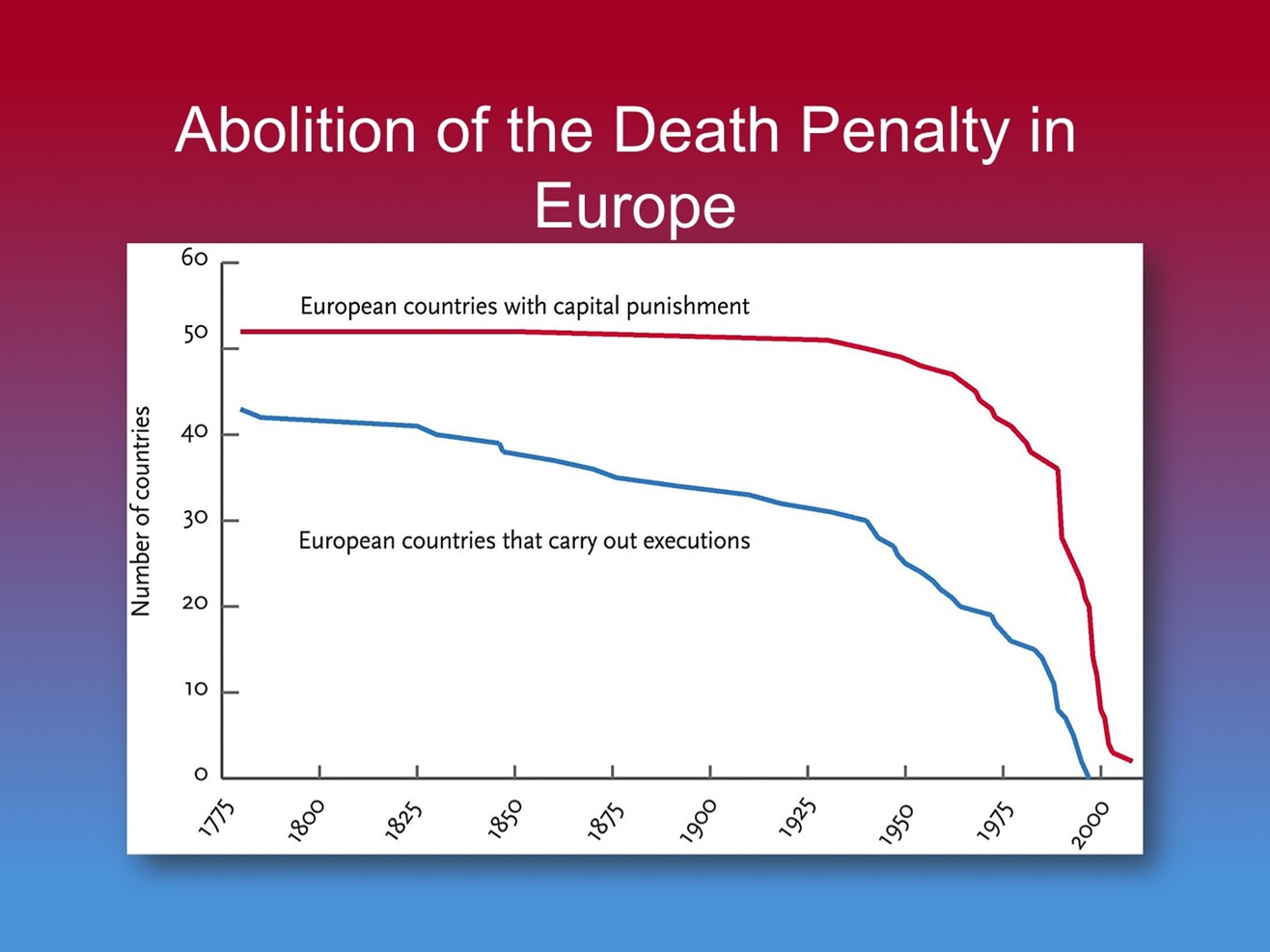 …Now the United States, of course, notoriously is the only Western democracy that has capital punishment (though only in two-thirds of the states), a number that has been dwindling. And to say that the United States has the death penalty is a bit of a fiction. If you look at the number of executions as a proportion of the population, it has been plunging since colonial times. Today, out of about 16,500 homicides per year, there are about 50 executions, and that rate has been in decline as well.

Here is a rough estimate of the homicide rate in New England from the National Academies: 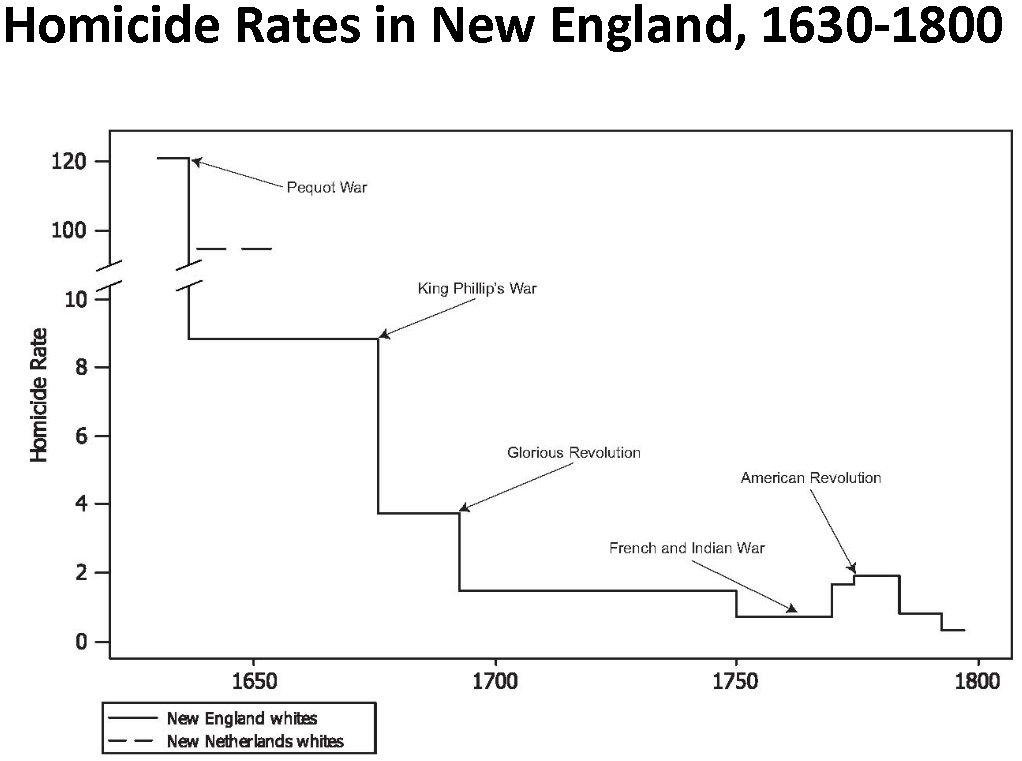 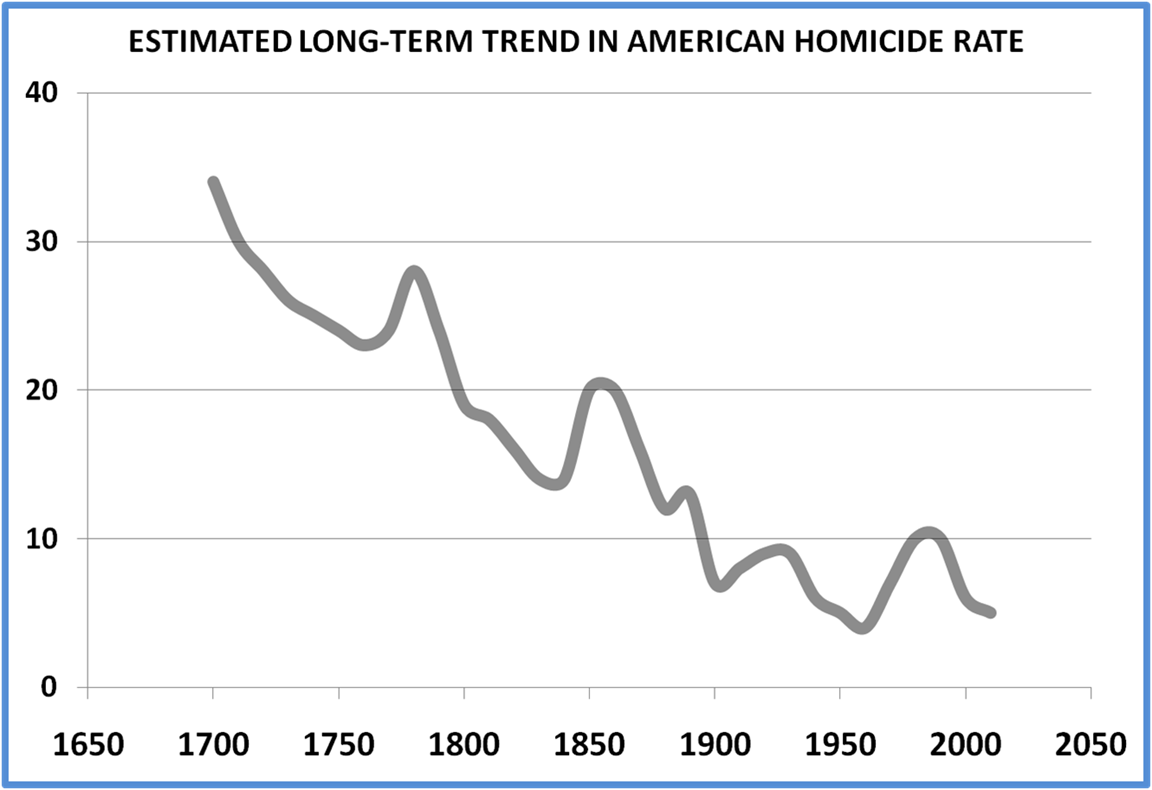 We have longer-term data for homicide in Europe. Here is data from Michael Eisner. It is on a log scale so it diminishes the true decline in the homicide rate which is over 50 fold. 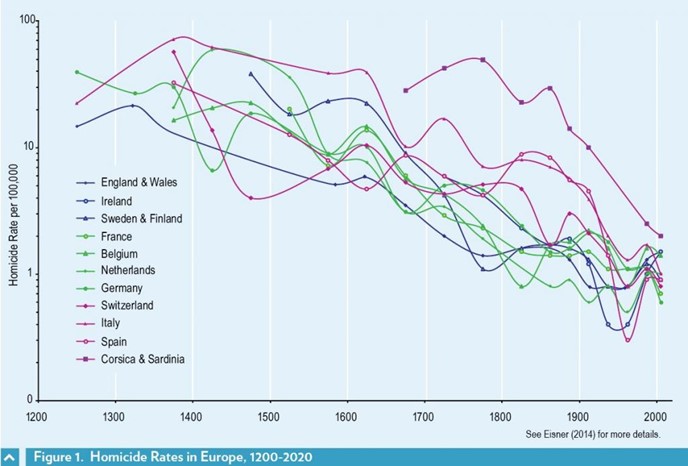 Bill Gates notes that Americans don’t just hurt each other a lot less, we also talk a lot more about rights:

Use of the terms civil rights, women’s rights, children’s rights, gay rights, and animal rights in English-language books, 1948-2000. These staggered rises tell a story. Each of the movements took note of the success of its predecessors and adopted some of the tactics, rhetoric, and most significantly, moral rationale. The Rights Revolutions have brought us measurable and substantial declines in many categories of violence. 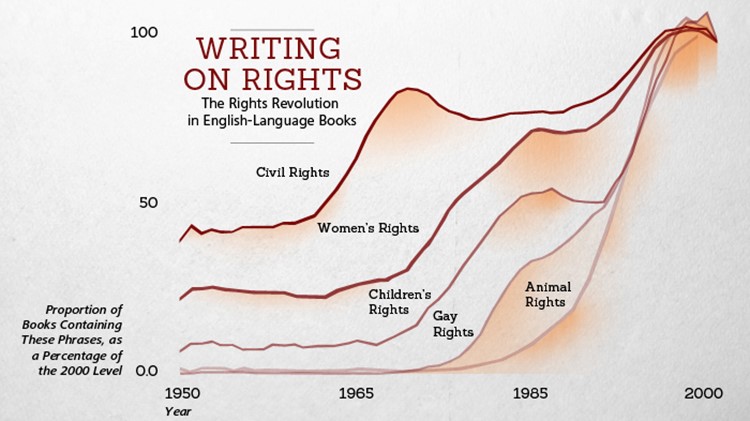 Plus, worldwide deaths in warfare have been declining too: 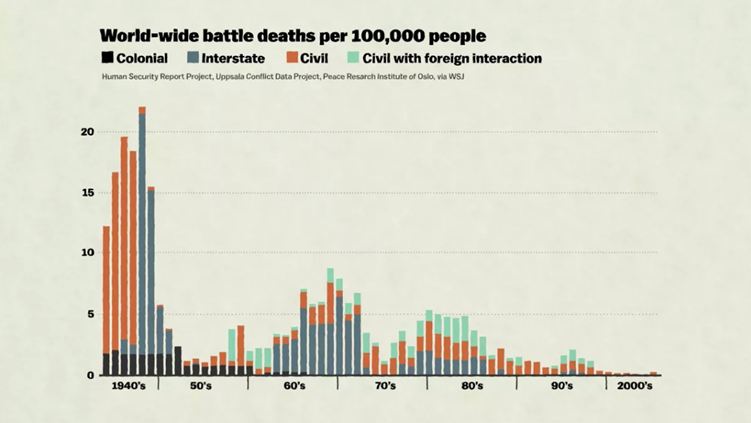