Home › Inequality › Why we should abolish the national minimum wage

Why we should abolish the national minimum wage

Arindrajit Dube wrote a paper in 2004 that explains several ways that the minimum wage is flawed in the US, including:

Dube has a better way.  He proposes to set the local minimum wage at half the local median wage.  That would automatically adjust the minimum wage to the local labor market and help keep it adjusted for inflation.  It would also raise the real value of the minimum wage up to the level where it was in the US in the 1960s and 70s and closer to the international average ratio of minimum-to-median in other OECD nations.

Jared Bernstein created a graph showing the effect of a proposal like this in a few regions of the US:

Many cities and states independently raise their local minimum wages to closer to half of the median wage because the federal minimum wage is just ridiculously low in high-wage places like New York City and San Francisco.  Dube’s proposal would standardize this tendency across the US.  Plus, businesses would be able to prepare for minimum wage hikes better if the process were standardized across the US and more predictable.  When legislatures arbitrarily adjust the minimum wage for inflation they cause relatively large, abrupt changes that are harder for businesses to adjust to.  In 1949, the minimum wage almost doubled and even small jumps can be hard to accommodate.  When Ohio suddenly raised the state minimum wage in 2008, it pushed the budget into the red at Bluffton University’s (where I work) because it was a large, budgeted expense.  Eliminating all the jagged increases on the graph below would create a more efficient system.

Dube’s proposal to set the minimum wage at half the local median wage is similar to what international businesses do.  They adjust the wages they pay across the regions of the globe to reflect the going wage in different locations.  For example, Ikea pays lower wages in areas that have lower wages and costs of living.  The minimum wage should adjust to local labor market conditions as well.  Dube’s proposal is also similar to the government’s method for setting the maximum CEO wage it pays to defense contractors and private prison corporations.  Kevin Drum explains:

Apparently the federal government has a cap on the amount it’s willing to reimburse contractors for the salaries of their employees. If…  your company’s CEO makes $3 million per year, you can’t charge it all back to the feds even if 100 percent of the CEO’s time is spent on government contracts. The limit, set in 1998, was $340,000.

[If that amount had risen with inflation], by 2011 it would be around $467,000. But no. It [rose to] $763,000. Why? Because ordinary inflation adjustments are for chumps, that’s why. For purposes of charging CEO overhead to the federal government, the cap was set at “the median amount of the compensation provided for the five most highly compensated employees of all publicly owned U.S. corporations with annual sales in excess of $50 million for the most recent fiscal year.”

This rule means that taxpayers have increased what we pay to the CEOs of government contractors much faster than inflation.  The median wage and even the President of the US’s wage has not risen nearly as fast.  CEO pay on the government payroll is rising fast because, as Lydia DePillis notes, the median salary of CEOs at America’s 3,000 largest companies has risen precipitously.  By now, CEOs are billing taxpayers about double the salary of the highest paid federal government worker (the president at $400,000).  DePillis argues that the government should worry more about raising the wages of the poorest people working for its contractors rather than the richest. She criticizes the Obama administration for not doing anything about the way its privatized corporate welfare for CEOs results in lower pay for ordinary workers and higher pay for elites:

Right now, the federal government employs some 2 million people  [working for private companies paid by government contracts] who make less than $24,000 per year, or under $12 an hour. The administration could, by executive order, require that all of them be paid at least that.

Instead, Obama raised the rate to $10.10 in January 2015.  Again, Dube’s proposal is more sensible.  Just set the minimum wage for federal contractors at half the local median wage.  Since it works for CEOs at the top, why use it for workers at the bottom too? 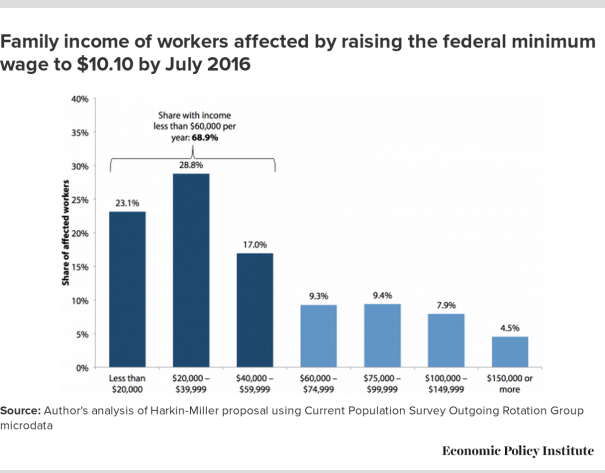 One reason why such high-income households see benefits from the minimum wags is that young people often get minimum wage jobs and many young workers live in middle-class households.  The Bureau of Labor Statistics estimates that about 1/3  of minimum-wage workers are teenagers and Heritage estimates that 62% of young adults and teens earning the minimum wage are enrolled in school.  Raising the minimum wage would help make college more affordable for them.  Whereas the real value of the minimum wage was much higher in the 1960s and 70s, the cost of college tuition has risen faster than average.  Until the 1980s, college students could earn enough to pay for tuition solely by working a minimum wage job during the summers.  The horizontal orange line is at about 480 hours which is what a student would work in a three-month summer job at 40 hours per week. 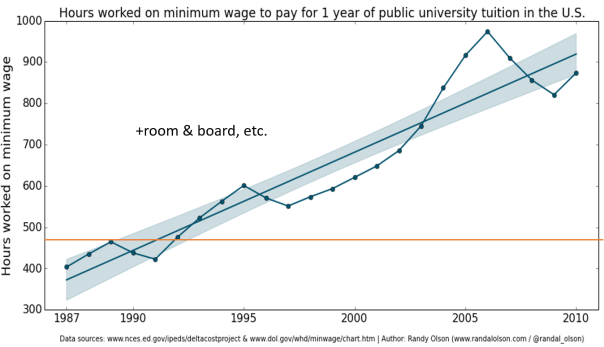 And raising the minimum wage up to half the median wage would put it closer to the level seen in many other rich nations:

Does the minimum wage increase inflation?  Will it increase the cost of fast food? Jordan Weissmann says that it will, but not by much:

But what about burgers specifically? Well, their prices would might go up a bit more. Based on data from 80s and early 90s, Daniel Aaronson estimated that a 10 percent increase in the minimum wage drove up the price of McDonald’s burgers, KFC chicken, and Pizza Hut’s pizza-like product by as much as 10 percent.

This is wrong.  A 10% increase in the minimum wage cannot conceivably increase fast food prices by 10%.  You know the above quote is wrong because of simple back-of-the-envelope math, and if you look at the original research cited at the above link, you will see that it too claims that the minimum wage is associated with trivial increases in prices.  The math just does not work for a 10% increase in minimum wage to increase prices by 10% because that would imply that minimum-wage labor is the only cost involved in producing fast food!  For example, suppose it takes one hour to make one burger and McDonalds is selling burgers at cost.  If wages are $10, then a burger will cost $10 if wages are the only cost of producing burgers.  If wages rise 10%, then prices of burgers must rise 10%.  But that is ridiculous because minimum wage labor is only a small fraction of the cost of producing burgers.  The owners of fast food restaurants get paid considerable money to compensate them for the fixed costs of the buildings, advertising, equipment, etc.  There are managers and accountants who get paid more than the minimum wage, and there is the cost of the meat, bread, packaging, cheese and other inputs that is produced in industries where minimum-wage labor is a tiny fraction of the total costs.  Steven Buckley estimated that TOTAL labor costs in the restaurant industry vary from only about 25% of total costs in fast food up to a high of about 40% in table-service restaurants, and even that greatly overstates the effect of minimum wage labor because of the jobs that pay more than the minimum wage like supervisors, accountants, marketers, and others.

In the US economy as a whole, labor compensation is about 60% of total income, but less than 3% of HOURLY workers earned the minimum wage and high-income workers are not among the hourly workers.  Because minimum wage workers earn a fraction of what the average worker earns, the share of total GDP that is accounted for by the minimum wage is undoubtedly far less than 1% of national income.  Even if the minimum wage were increased 10% , it is unlikely to increase prices by a tenth of one percent which is unmeasurable relative to the inherent noise and uncertainty in our inflation measurements.

If you are worried about the effect of labor income upon inflation, you should be more worried about pay for elites because the minimum wage is simply a nothingburger in the US economy compared to the BONUSES of Wall Street. Here is data from The Institute for Policy Studies.

One comment on “Why we should abolish the national minimum wage”