#Pence2018: What gay bunnies mean for a Pence administration.

This is the most dramatic change in public opinion I have ever seen in my life.

Now that gay marriage is overwhelmingly popular among Republicans and Democrats alike, a lot of Americans are concerned that a Pence administration would cause backsliding on gay rights. Mike Pence gained the national spotlight as governor of Indiana by fighting for the rights of homophobic people to be able to discriminate against gay people and that is the most salient fact that a lot of Americans know about Mike Pence. But rest assured that there are several reasons why a president Mike Pence wouldn’t do more than Donald Trump to curtail gay rights.

First of all, most people don’t realize it, but Donald Trump has already had a remarkably homophobic administration. This is all the more remarkable because Trump himself has never been particularly homophobic. He has always had very cosmopolitan, free-wheeling views about sexuality his entire life as you can see from his personal behavior. However, he has filled his administration with a lot of homophobic people (like Mike Pence) and to a large extent the president makes policy by making personnel choices because presidential appointees have wide latitude in deciding how they execute the law. Trump himself has little interest in policy details, so the people around him control the show when it comes to actually administrating the more than 4 million people who directly work under the president plus the millions of additional Americans who indirectly work for the executive branch as contractors. Trump has no clue what all those people are doing and has shown less interest in learning the details than any other president in living memory.  So Trump’s anti-gay appointees have been quietly doing the kinds of things you would expect a Pence administration might do.

Secondly, the graph above shows that the electorate is at a completely different place now from where it was when Pence was defending the rights of homophobic people. Pence’s position was overwhelmingly popular in 2009, but you don’t see him openly advocating for the right to discriminate against LGBT people anymore because it is a political loser now. The Trump administration has been implementing homophobic policies as quietly as possible and it is easy for them to keep their everyday activities out of the headlines when the news is always dominated by scandals and other outrageous things that are constantly happening in Washington. In a boring, normal Pence administration, ordinary policy changes like allowing the government and its contractors to discriminate against LGBT people would have a chance of getting into the news that Americans see. I bet you didn’t even know that Trump did that (and lots of his other unpopular policy changes) because the latest Trump Reality Show drama drowns out the relatively boring, but consequential actions of his administration. The news is dominated by Trump tweeting childish taunts at North Korea or suing his porn-star friends to censor them from talking about their relationships with Trump. It is easy to keep quiet about LGBT policy when Trump is a natural-born click-bait headline generator.  A President Pence would get away with a lot less than Trump because Pence would not be nearly as good at distracting the public with the constant smoke and mirrors show that Trump can’t help but put on.

Thirdly, Pence himself has shown evidence of becoming more accepting of LGBTs. He stopped campaigning about it long ago and is now denying that he ever had some of the positions that he used to be associated with such as “conversion therapy” to “treat” homosexuals and turn them straight. For example, in 2000, his website said he supported funding to assist “those seeking to change their sexual behavior” in order to combat the spread of HIV.  Naturally given Pence’s reputation, and long, close association with groups that promote conversion therapy such as James Dobson’s Focus on the Family, this was widely interpreted to mean conversion therapy and Pence never tried to reject that interpretation for 16 years.  But in 2016, Pence finally came out as definitively rejecting conversion therapy and denied that he ever supported it.

Now the number one bestselling book in America is about a little gay bunny who belongs to Vice President Mike Pence.   This illustrated children’s book is about a gay romance between two bunnies.  It is a parody of a children’s book by Mike Pence’s daughter Charlotte who said that “we can all get behind,” the gay rights charity that the gay bunny book supports.

Nothing illustrates change better than the Pence family getting behind a children’s book about their gay bunny that becomes the #1 bestseller in America.  A decade ago I never would have guessed this would happen today. 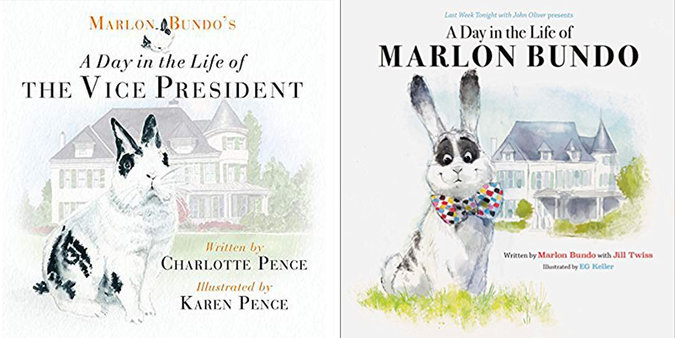 The gay bunny book was thought up by comedian John Oliver whose video about Pence tries to make him seem like a terrible person, but except for Pence’s homophobia, John Oliver just proves that Pence is a lot better than Trump. For example, John Oliver bashes Pence for lying, but his evidence is weak.  When Pence was asked to defend Trump’s baldfaced lies claiming Trump won the popular vote, Pence dissembled and deflected like a normal politician.  He didn’t call out his boss as a liar, but he also refused to confirm Donald Trump’s baldfaced lies.  The worst you can accuse Pence of doing is saying that nobody knows whether Trump’s lies are true or not which is probably a lie, but perhaps Pence is just a committed postmodernist!  (Ok, now I’m lying.)  But at least Pence looks uncomfortable when he is confronted with Trump’s lies which is a big improvement over Trump.