Posted on November 26, 2018 by Jonathan Andreas — Leave a comment

Emily Stewart at Vox.com made a mistake about monopoly power in America. She wrote that

Amazon… could eventually become so big that it can control what shipping companies such as FedEx and UPS charge it, and, in areas where it becomes a dominant buyer of labor, could contribute to pushing employee wages down.

Emily should read more articles at Vox.com because then she could learn that Amazon is already big enough to control what shipping companies charge. This has been longstanding practice at all the big shippers: FedEx, USPS, and UPS as noted in this 2010 NYT article. And they don’t just give Amazon a big discount on shipping, but also Walmart an all the other big retailers.

This monopsony power over suppliers increases their monopoly power over other retailers because it puts smaller companies (and potential startups) at a big disadvantage because smaller retailers (and individuals like me) have to pay much higher shipping charges.  That is why ordinary people are often shocked when we go to the Post Office at how expensive it is to ship something that we just got delivered for free from Amazon.

Although some media reports have claimed that the USPS undercuts competing shippers by charging “about half what …United Parcel Service Inc. and FedEx Corp” would charge, nobody really knows exactly how much of a sweetheart deal each retail behemoth pays for shipping anywhere, so this is pure speculation. However we do know that Amazon doesn’t exclusively use USPS for shipping, so they must not get lower prices at USPS on every kind of delivery.

Amazon uses all the big shipping companies, so Amazon must get lower prices from FedEx and UPS sometimes. Here is one estimate of the Amazon market share for different shippers: 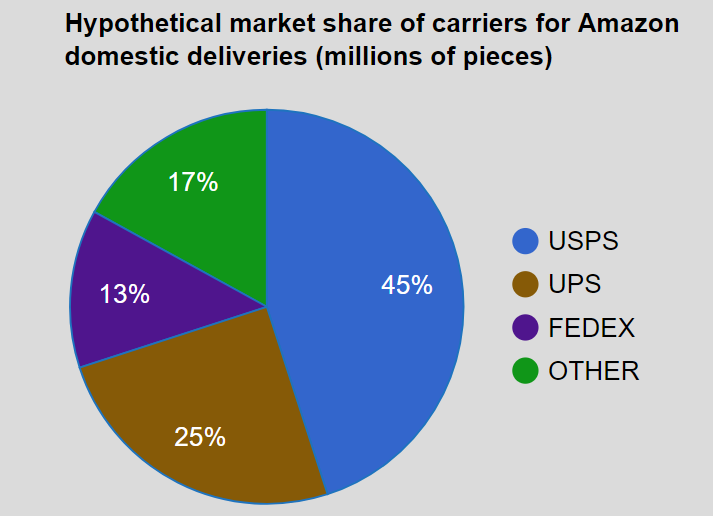 One reason Amazon (and most other big retailers) gets better prices than smaller retailers is that they handle much of their own shipping in house. For example, Amazon tries to handle most of the long-distance shipping by distributing goods to its regional warehouses located around the country that reduce the distance and time of delivery that Amazon has to pay the shipping companies to do. Here is a map showing some of Amazon’s physical locations in 2017 although the purple warehouses are the only relevant locations for shipping purposes: 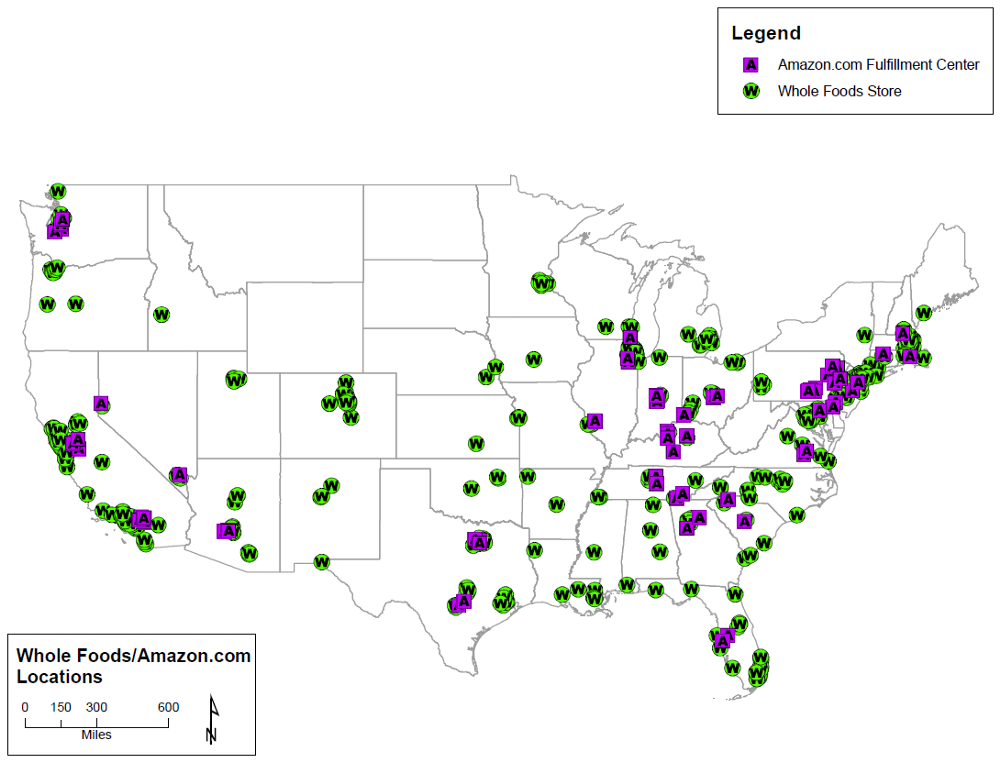 Amazon has been trying to vertically integrate more and more of the delivery process to increase speed and reduce costs and gain more advantage over not only the delivery companies, but smaller retailers as well.

Other than that error, the rest of Emily’s essay gives useful information about the creeping monopolization of the economy (bullet points added for emphasis):

On Monday, the Open Markets Institute, an anti-monopoly think tank based in Washington, DC, released a new report on what it calls America’s “concentration crisis.” The report details how a variety of industries, ranging from cat food and jelly to domestic airlines and cellphone providers, have come to be dominated by just a handful of actors in recent years.

She also pointed to a David Leonhardt summary and the accompanying chart showing how much the market share of just the two biggest companies different industries has changed in the past 15 years or so. 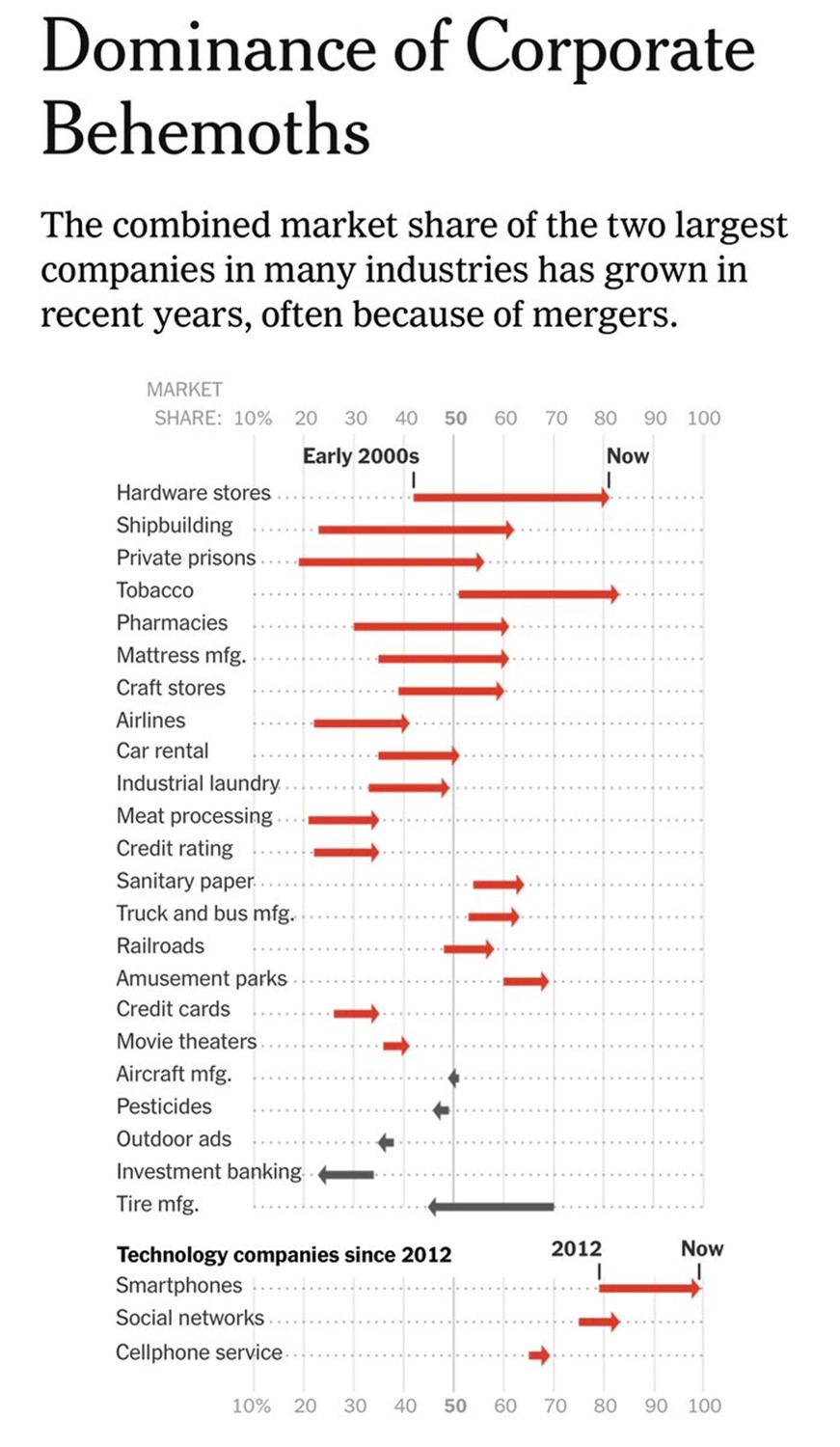 Thank goodness for the Open Markets Institute’s work on this. The US government stopped caring about this when they all but stopped enforcing anti-trust policy in the 1980s. In fact, the government doesn’t even track monopoly power anymore. As Emily points out, “The Federal Trade Commission stopped collecting and publishing data on industry concentration in 1981.”

This was partly due to libertarian ideological influences that downplayed the potential problems of monopoly power that changed how the government and the courts deal with antitrust. Notably, Robert Bork’s writings which culminated in a 1987 book were extremely persuasive at getting the authorities to stop caring about rising industry concentration like this.