A public conspiracy to protect pharmaceutical profits at taxpayer expense

Posted on December 3, 2018 by Jonathan Andreas — Leave a comment

Every so often I get requests to sign a petition supporting various business interests. The petitions are promoted by fly-by-night “organizations” that are fronts for lobbyists like EconomistLetter.com.  Lately I’ve been getting emails from ConcernedEconomists.org that are worried about the pharmaceutical industry’s profits: 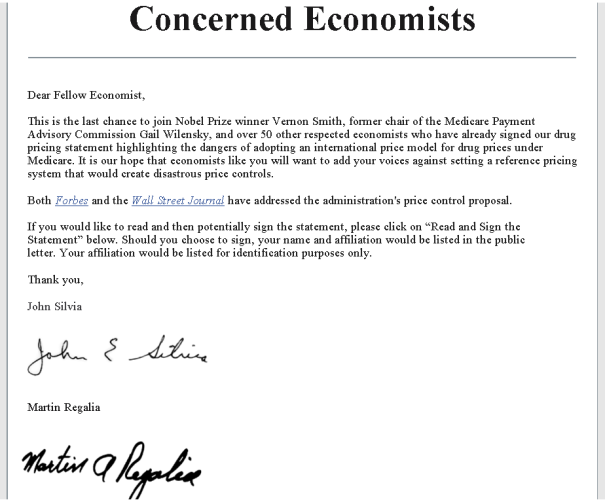 Various Democrats have promoted the idea that Medicare should be able to negotiate the prices it pays for pharmaceuticals just like Walmart or CVS does so that Medicare can pay less than list price just like every large private corporation does and they are particularly worried now because Donald Trump has often said that he agrees and his administration has been actively pursuing ways to do this.

In most rich nations the government holds down pharmaceutical prices by negotiating with manufacturers for discounted prices. Although the US government (via Medicare, Medicaid, the VA, etc.) is by far the largest buyer of drugs in the world, it is also the only buyer in the world that cannot legally negotiate prices because the government has banned itself from doing so. So the government is stuck paying the highest price (the list price) along with unlucky individual Americans who have a bad PBM.

Because Americans pay much higher drug prices and allow more drug marketing, we spend FAR more on drugs than any other country on earth.

America accounts for less than 4.3% of the world population, but 45% of the world’s pharmaceutical expenditures in 2016! Americans use fewer drug prescriptions than many rich nations (Japan prescribed 60% more per person), but our prices are much higher which means that the USA provides the global pharmaceutical industry with much more than 45% of their profits. The US is also unusual in that nearly 75% of US drug expenditures went to branded drugs (as opposed to generics) even though 84% of prescriptions in the US specified cheap generics (the highest percent utilization of generics of any rich nation). So the US is paying the majority of the world’s pharmaceutical profits

I didn’t sign the letter and Vernon Smith (who often lends his once-respectable name to such efforts), and other signatories should be embarrassed to let this lobbying effort use their names. The lobbyists themselves are so embarrassed that they don’t even say who is funding and managing the organization that is collecting signatures. The entire effort is being run like a conspiracy that is so criminal or embarrassing that its funders and leadership (other than the people named on the letter who are hopefully well compensated for having their names associated with the project) are trying to obfuscate responsibility. Rather than even use their own website domain for collecting signatures, they are using a Google Doc that is harder to trace to its owners. They will probably take down the document soon, so below is the full text. Their claims are misleading, but no doubt they will sucker some people into signing.

We write to express concerns about a proposal that would adopt an international price model index to establish drug prices under portions of the Medicare program. Such a system would reference drug prices set by selected foreign governments to determine the maximum price at which a particular drug could be sold under Medicare.

Implementing a reference pricing system in the United States would create price controls that bring with them the same types of harms these policies have caused in foreign countries, to the detriment of the health care system at large and investments in U.S. research and development. History has shown that price controls on any commodity or service produce unintended but consistently detrimental effects.

In general, setting price controls at below-market rates leads to shortages, squeezes the cost bubble toward some other portion of the economy, and imposes a deadweight cost on society. In this case, price controls can lead to a reduction in patient access to certain drugs, less investment in the research and development of new drugs, and cost-shifting that raises the prices of other therapeutics. Ultimately, patients will suffer as cures are delayed or entirely undeveloped, while taxpayers will be denied potential savings from drugs that could obviate more expensive treatments in government healthcare programs, and the investment of capital in development of new medicines.

UPDATE December 10:  I just got my third email solicitation which is extending their deadline, so the “Concerned Economists” must not be fooling as many people as they had hoped into signing.  If you are in DC, see if you can find out what is at the address they have posted on the letter: Concerned Economists | 122 C St NW, Washington, DC 20001