Posted on January 22, 2019 by Jonathan Andreas — Leave a comment

The top 1% richest people saw their income growth skyrocket and the poorest people in the world did pretty well, but the global middle class and upper-middle class did the worst.

Oxfam also published their latest accounting of global wealth inequality and made social media go nuts when they concluded that the 26 richest people on earth in 2018 had the same net worth as the poorest half of the planet. In other words 26 people owned as much wealth as the 3.8 billion poorest people. That isn’t actually as bad as it sounds because a whole lot of the people Oxfam includes in the bottom half are net debtors in rich countries like recent college graduates with large student loans that they will easily repay. Even people like Donald Trump would have been categorized as part of the poorest half of the world during the times when The Donald went bankrupt and owed millions of dollars more than he had. It takes a fairly rich person to acquire big debts and some of Oxfam’s “poor” people are actually in that category.

But that doesn’t mean that the data is wrong.  For example, Credit Suisse also just published their latest Global Wealth Report which includes this data: 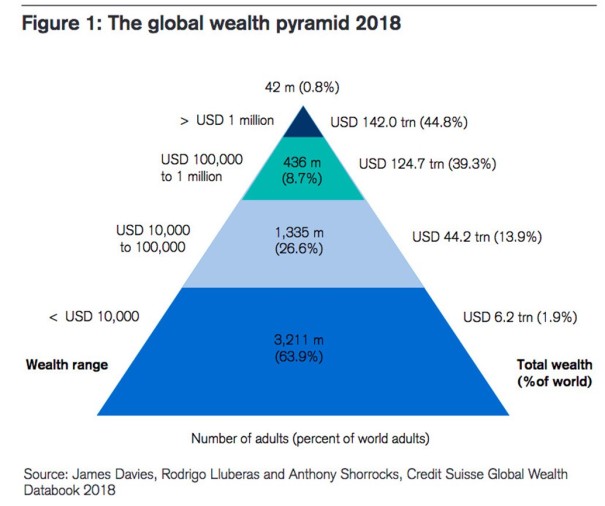