Posted on February 20, 2014 by Jonathan Andreas — Leave a comment

A lot of Americans dislike the Affordable Care Act (ACA or Obamacare) because they say it expands government too much and will increase taxes.  As Milton Friedman accurately said, for the government, to spend is to tax.  So how big is the actual increase in government spending?  Forbes magazine editorials have been wanting to roll back the ACA and a recent Forbes headline by Chris Conover reads, “Takeover: Government On Track To Make Up 66% of Healthcare Spending“.  But if Forbes really wants to roll back the government takeover of healthcare, they need to roll back our biggest government healthcare program: Medicare.  By Forbes’ numbers, Obamacare will only increase the government share of health spending by six percentage points from 60% to 66%.  Medicare has always been where the big money is.  Medicare gives free universal health insurance to all Americans over age 65 and it is very expensive to give free healthcare to old people.  Strangely, I couldn’t find any cost comparisons of Obamacare and Medicare, so I made a graph of projected 10-year spending based on the most comparable CBO statistics I could find.* 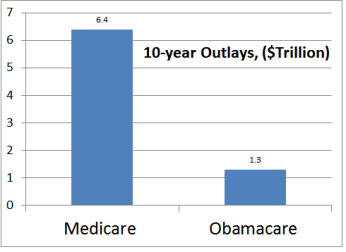 My above comparison greatly inflates Obamacare’s portion of government healthcare expenditures.  The true number is probably closer to Forbes’ numbers: about 10%.  On top of the Medicare spending, Medicaid is also much bigger than Obamacare, and some of the ACA’s expenditures are entangled with Medicaid, Medicare, and other Federal programs.  In particular, it is hard to disentangle Medicaid from the ACA because a large fraction of ACA spending will go through the Medicaid system.  The ACA is so small relative to Medicare, it will raise government health spending less than Medicare is expected to increase over the next 25 years.

If you really want to get the government out of healthcare, you need to go where the money is and attack Medicare and Medicaid.  Obamacare is small potatoes compared with them.  It is more comparable in size to the Veterans Administration spending than it is to the big government healthcare programs.

So if you really want to get government to stop meddling in healthcare, you gotta go after the big old elephant in the room, not the little new pipsqueak.  Ironically, if the Republican party is successful at repealing Obamacare, many liberals think that the result would be to increase the likelihood of expanding Medicare for all and more Medicare would be a much bigger government intervention in healthcare.

*The numbers in the graph aren’t perfectly comparable, but better statistics would probably make Medicare look even more expensive compared with Obamacare over the next ten years.  For example, the 10-year estimate for Medicare begins counting in 2013 and the ACA estimate begins in 2014, so Medicare would cost even more over 10 years if both estimates began in the same base year because of adding 10 years of inflation and population growth to the costs of one year.  The Medicare estimate also excludes administrative costs.  The only factor that I can see working to shrink the estimated costs of the ACA is the fact that it is not covering as many people in 2014 as it will cover in subsequent years, so beginning its 10-year total cost in its first year is going to be a little smaller than the estimate would be if beginning a year later in 2015.