Posted on June 6, 2015 by Jonathan Andreas — Leave a comment

In effect, a market is a like a voting mechanism where people vote with dollars to determine the median valuation.  The main difference from democracy is that people with more resources get more votes in markets. It is the median valuation of the participants that determines the market price. For this reason, it was misleading for Noah Smith to say that:

nearly everyone on Wall Street was eager to tell you back in 2012 that QE would cause a big rise in inflation. But when you looked at TIPS spreads, it was clear that the marginal investor wasn’t putting his money where his mouth was.

Noah Smith appears to be saying that only a “marginal investor” was betting against inflation.  What he really meant to say is MUCH stronger.  He meant to say that the median investor dollar was betting against inflation.  You can easily search Google News for 2012 and see that Wall Street tycoons and media outlets were predicting (again) that the third round of quantitative easing would cause big inflation.  Meanwhile the median investor dollar was generally expecting slightly lower inflation than before.  Investors who feared inflation could buy inflation-protected government bonds (called TIPS), but the interest-rate spread between TIPS and regular bonds did not rise.  TIPS pay their interest rate plus the inflation rate whereas regular bonds just pay their interest rate so the spread between TIPS and regular bonds is the median bond market prediction of future inflation. 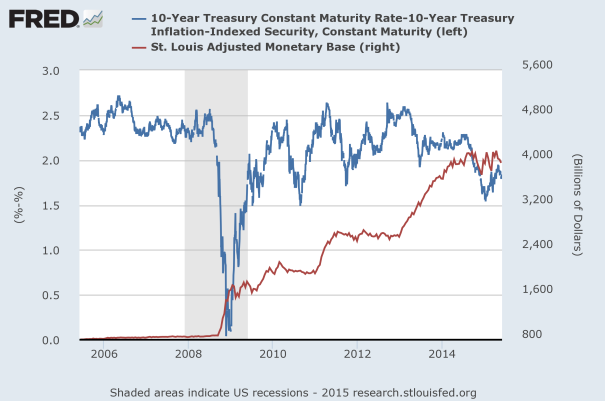 Noah Smith meant that when a market price changes a little bit, it only necessarily means that a few of the people with valuations near the median have changed their minds about the price.  All we can say about all the other valuations is that half are higher and half are lower.  But when economists talk about “marginal investors”, ordinary people are going to think about the ordinary English definition of “marginal” and think that that means “fringe investors” are betting on low inflation. In reality Noah Smith meant that the median investor dollar was betting that inflation would not rise.  A better way to say it is that a majority of investor bets were predicting low inflation.  That sounds very different than what Noah Smith wrote.