In the wake of the mass shooting tragedy in Los Vegas, Vox posted an analysis showing that more guns lead to more gun deaths: 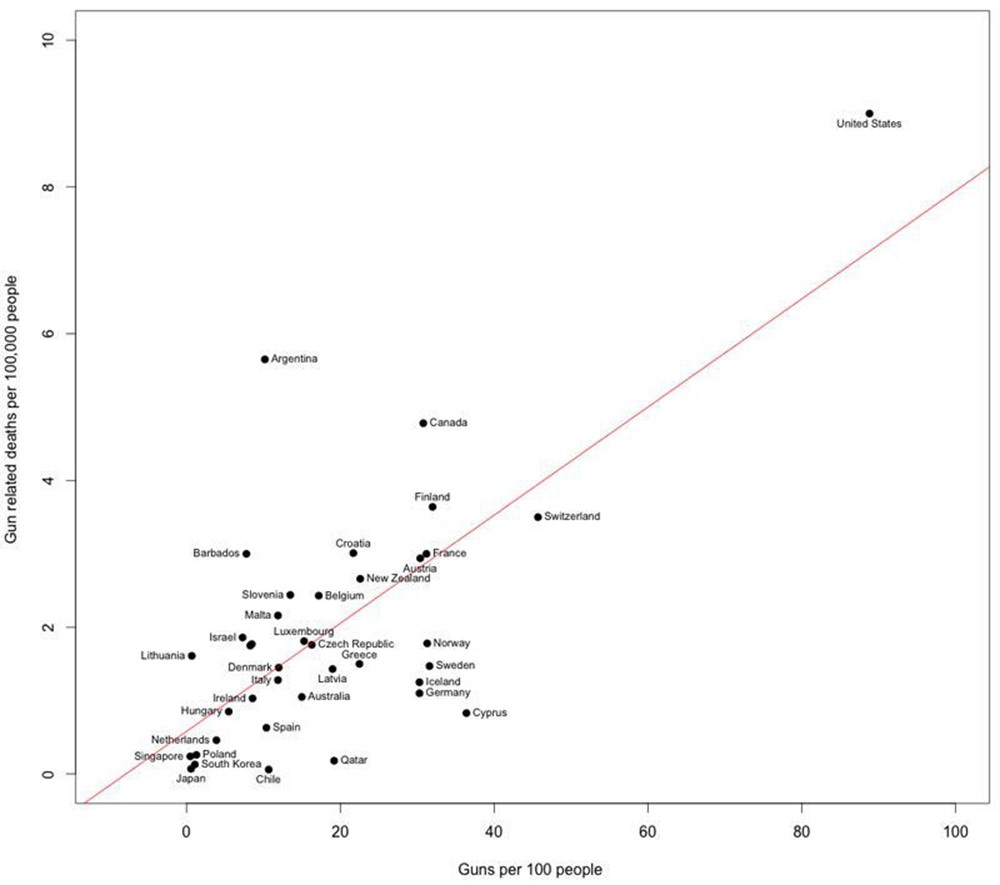 I was immediately suspicious because I’m living in Guatemala and I am constantly being reminded that Latin America has very high homicide rates, and although I see guards with massive guns all over the place, Guatemala has quite low gun ownership rates. Whereas I agree that a lot of data supports the thesis that too many guns contributes to more gun deaths, gun availability isn’t the only thing that leads to gun deaths. Other factors are often more important. Otherwise the US would have the highest homicide rate in the world because the US has by far the most guns per capita.

I can’t figure out any simple rule that explains how they picked the nations they included in the above graph. It isn’t the list of OECD nations. It is pretty close to a graph that excludes all poor nations, but if so, then it should really include Panama and Uruguay which are richer than Argentina (which is included). But that wouldn’t fit the thesis that guns cause more deaths as nicely. The graph originally came from Tewksbury Lab, but they have taken down all reference to it, so I can’t see where they got their data, but it looks like they used data from the 2011 “Estimating Civilian Owned Firearms” by the Small Arms Survey. Nationmaster seems to have taken the Small Arms Survey data and added some estimates for other countries to come up with a more comprehensive data set of gun ownership which I combined with World Bank homicide data to produce this graph: 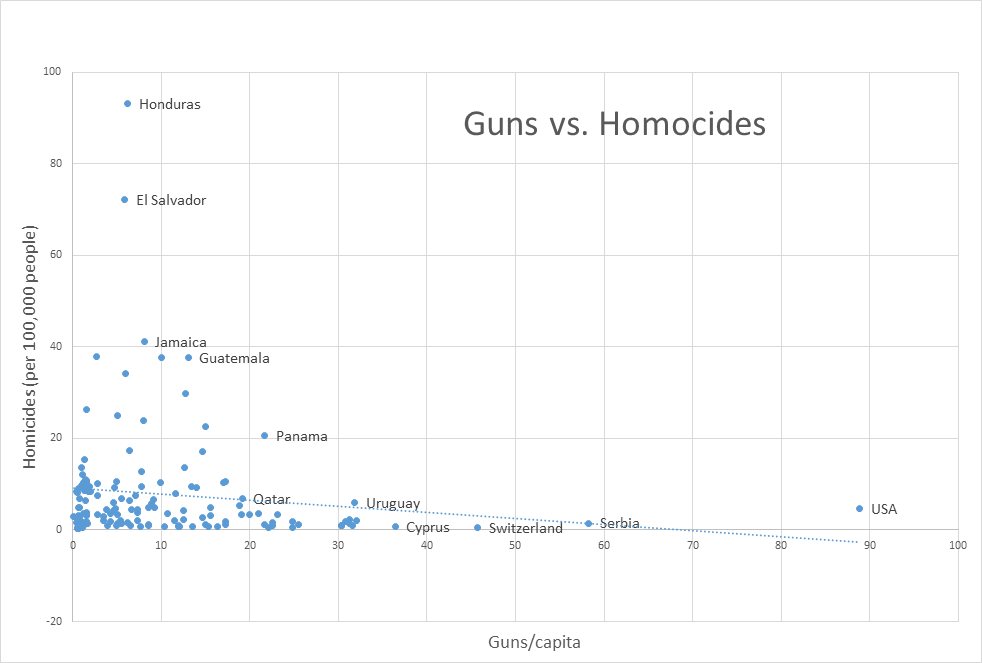 In fact, it appears that gun availability is actually somewhat correlated with fewer gun deaths. I tried excluding all nations poorer than Spain, but it still doesn’t give much support to the thesis that more guns cause more homicides because there is little correlation again: 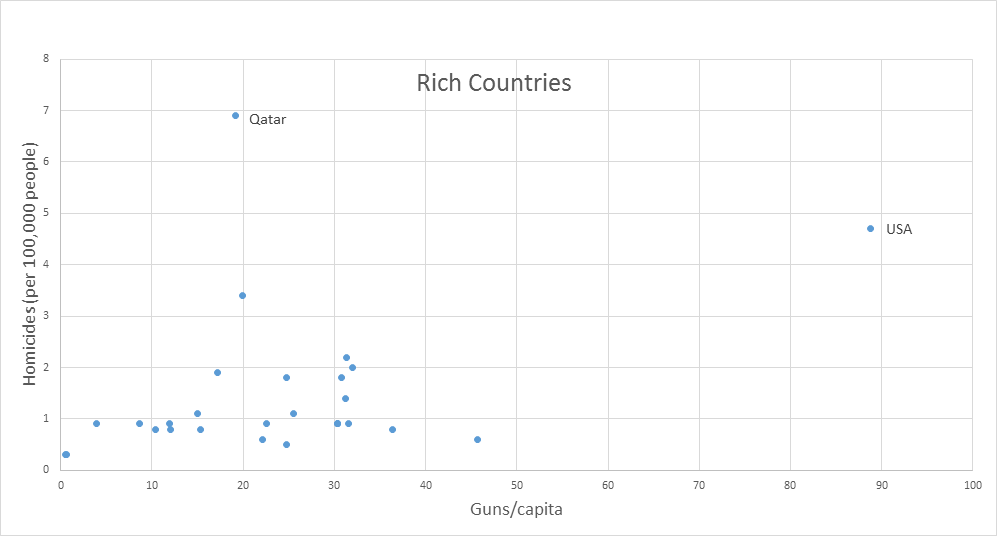 Basically, there are two outliers, the US and Qatar, and they are so different from all other rich nations, that they should both probably be excluded. When you do that, again there is almost zero correlation between guns and homicides. That doesn’t mean that guns don’t contribute to the high homicide rate in the US, but it just isn’t a simple matter. Lots of other factors are also important such as environmental lead, criminal justice, inequality, etc.

Below is another graph using data from Wikipedia’s entry about firearm-related deaths which looks more reliable than NationMaster because Wikipedia cites where all their data comes from, and it is more up to date. Still, it tells a similar story. 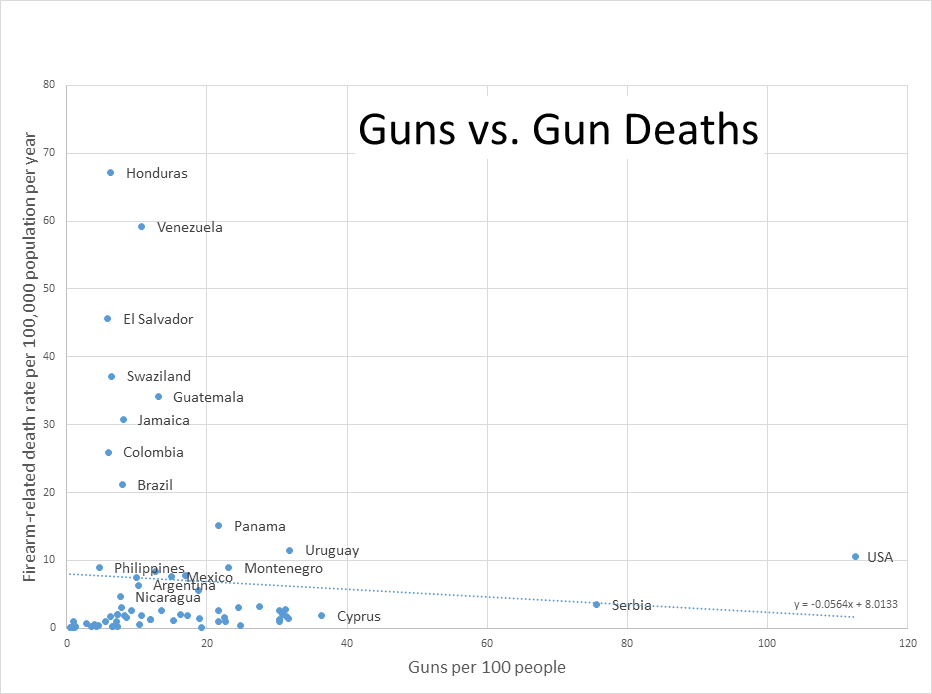 Guns don’t make that much difference because there are wide differences in the number of homicides per gun: 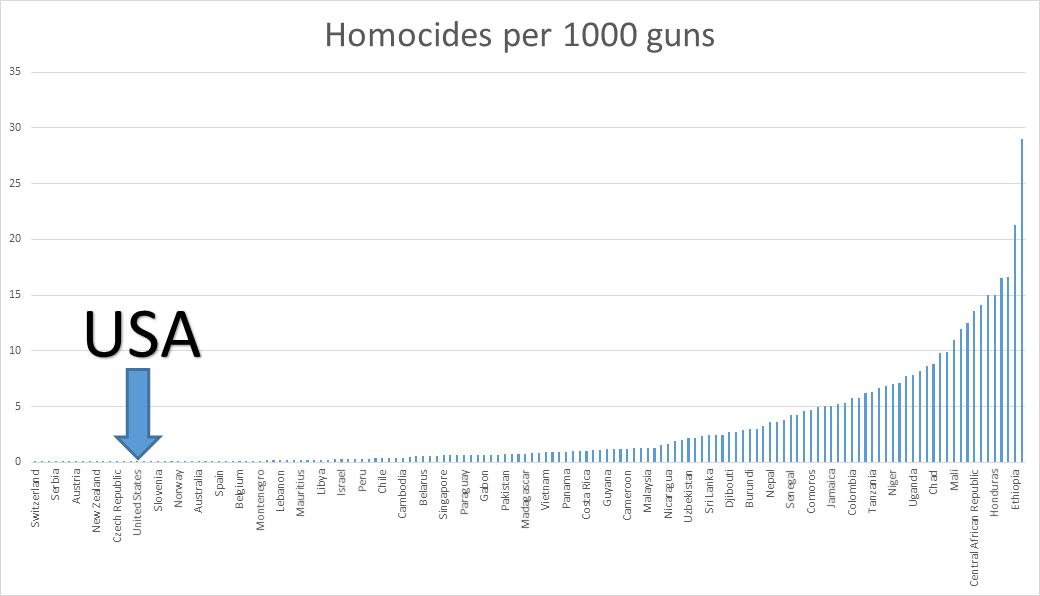 That is using the Nationmaster & World Bank data again. Each gun kills over 2,000 times more people in Tunisia than in Switzerland. Here is a close up of the left tail of the above graph to show the nations that have low levels of homicides per 1,000 guns like in the USA.  On average, only about 1 in 20,000 guns is used to kill people in America.  That is just a few bad apples. 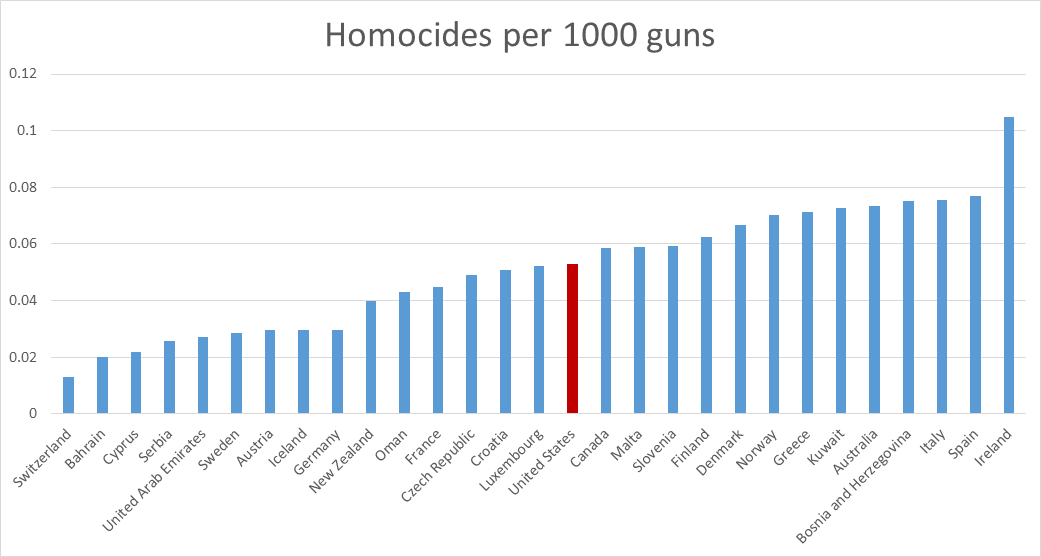 UPDATE: I found the original graph on the Wayback Machine and the author’s methodology looks sound, but he says he got a lot of criticism about it (UPDATE AGAIN: as he explains in comments below, he unfortunately just happened to take down his old website, so it was hard to find his original work.)

Also, the following chart from Mother Jones is a pretty convincing simple demonstration that more guns are linked to more deaths since US states are all relatively similar in income, culture, demography, criminal justice, and all the other important factors that influence homicides, so the effects of differences in gun ownership can pop out more clearly:

So, reducing gun access undoubtedly saves a few lives (particularly gun suicides and gun accidents), but lots of other factors are more important for saving lives than guns.

It may be harder to commit mass murder without guns, but extremists have managed to do it with airplanes, trucks, and explosives too, so gun restrictions help, but they don’t eliminate the problem and fear of mass murderers is completely irrational anyhow.