What is imputed rent?

Suppose you own a house worth $240,000, but your job forces you to move to Chicago for two years where you will have to pay $12,000 ($1,000/month) to rent another house with nearly identical characteristics. Fortunately, you can rent out your house for $12,000, but this won’t completely cover your cost of housing because you will have to pay 25% income tax on the rent you earn ($3,000), so your gross housing bill goes up just because you are paying rent for the same kind of housing. As it turns out, your new landlord is Jane who happens to also be relocating to your town and she will be renting your house and paying you $12,000 too. Legally, she will also have to pay $3,000 income tax on the rent you are paying her, but if you can both just quietly agree to trade houses without any money being exchanged, you can both avoid paying these taxes.

That is imputed rent and everyone who owns their home is getting the same kind of economic benefit stream (a.k.a. income) from owning their home whether they rent out the home or whether they live in it. If they rent it out, they get rent payments, and if they live in it themselves, then they are earning “imputed rent”. Imputed rent is the rental value that an owner would get from renting the home they occupy at market rates. A few countries including Iceland, Luxembourg, the Netherlands, Slovenia, and Switzerland do tax imputed rent, and where it is not taxed (like in the US) it is the biggest subsidy for home ownership. For example, suppose you were renting for $12,000 ($1,000/month), and earning $1,000/month on $240,000 in savings. If you used your savings to buy the house where you live for $240,000, you would still be getting the same amount of earnings from your savings ($1,000/month), but your taxes would drop under the American system which ignores imputed rent. It isn’t fair to levy a higher tax on people who have invested their savings in stocks or bonds rather than in housing.

In addition, there are a lot more tax breaks for homeowners like the mortgage-interest tax break that increase the government tax subsidies for home ownership. The mortgage-interest tax break would make sense in the above nations where imputed rent is taxed because in that case the interest would be just like any other business expense, but in the US, it is just an extra subsidy on top of the savings from avoiding taxes on imputed rent income.

Below is a graph from the Urban Institute via VOX that shows how much the OTHER kinds of subsidies benefit owner-occupied households in different income classes, but with interest rates so low right now, the tax savings of untaxed imputed rent is probably much bigger than the more explicit subsidies shown in the graph below, at least for families in high income tax brackets. 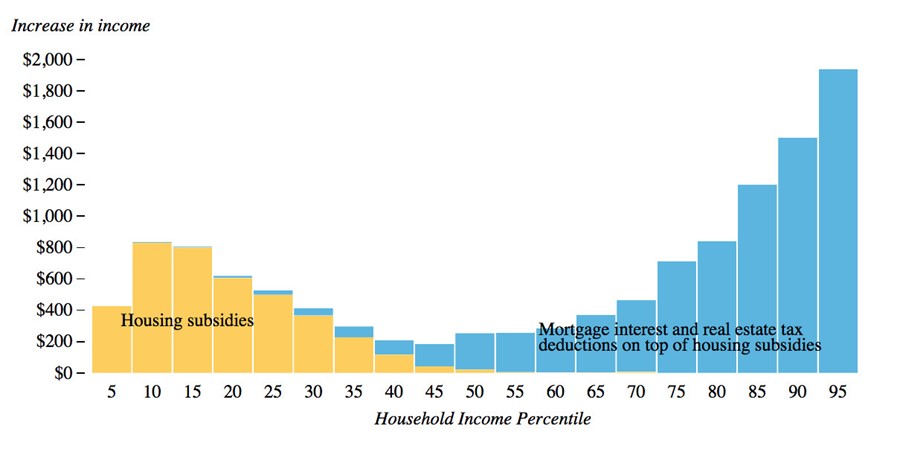 The rent that home owners pay themselves is a kind of tax-free income and combined with the other subsidies for homeowners, renting becomes a worse deal financially than buying for most Americans who are going to live in one place long enough to cover the higher transactions costs of buying a home.

These subsidies are wasteful because they decrease labor mobility (because homeowners have higher transactions costs that impede them from moving closer to new jobs) and they encourage Americans to spend excessive amounts on McMansions.  These policies are also regressive because most people below the median income don’t get the subsidies because they rent whereas most Americans above the median do get them because home ownership rates rise with income and the subsides are higher for more expensive homes and even the plutocrats with numerous homes get the imputed rent subsidy for owning them.

The Mortgage Bankers’ Association’s think tank, The Research Institute for Housing America investigated the value of parking spaces in five US cities which was neatly summarized by Richard Florida:

The costs they calculated for each household are the replacement costs of the parking spaces. It looks expensive for just a bunch of asphalt and concrete, but the land costs a lot, especially in New York City.

It is easy to convert this information into the imputed rent of parking per household. The simplest–and probably most accurate–way is to simply multiply the total cost by the discount rate. The discount rate in this case is the opportunity cost of funds that residents face which varies widely and the proper way to calculate that would be to find the weighted average cost of capital (WACC).

That is basically the average borrowing cost for households as weighted by the amount that they have borrowed. I don’t know what that is, but the Stern Business School compiled a database of the WACC for America’s corporations and the average WACC in January 2019 for non-financial firms was 8.22%.

So if America’s households were lucky enough to borrow money as cheaply as America’s big corporations, then their per-household imputed annual rent for parking comes out to:

If they hadn’t built all of that parking and decided to rely upon public transit, Uber, and other kinds of transportation that doesn’t require so much parking, then households would have approximately that much more money every year. New York City basically made that choice and only has a minimal amount of parking which is why New York’s average imputed parking rent is so low.

But because parking is a fixed cost, it is a hidden cost that we don’t have to think about every year and so most people ignore how much of a burden it really is every year.

Below is one of the satellite images the researchers used to measure the amount of pavement that is used for parking. This shows a neighborhood in Seattle.

The area of green space appears about as big as the area for parking but a lot of the green is tree tops that are just hiding some of the parking space below the canopy.