Who wins when monetary policy prioritizes low inflation over wage growth or unemployment?

I’ve previously argued many times that the Fed is overly worried about inflation and not worried enough about the wages of the median American and about unemployment.  Today Paul Krugman gives some back-of-the-envelope estimates of who benefits from the Fed’s inflation obsession.

Still, it is worth asking who benefits from low inflation or deflation, and from higher interest rates. And the answer, basically, is rich old men.

On the rich part: Using SIPP data, we can look at the comparison between financial assets and debt by household net worth:

Only the top end have more financial assets (as opposed to real assets like housing) than they have nominal debt; so they’re much more likely to be hurt by mild inflation and be helped by deflation than the rest.

Now, it’s true that some of these financial assets are stocks, which are claims on real assets. If we only look at interest-bearing assets, even the top group has more liabilities than assets:

But the SIPP top isn’t very high; in 2007 you needed a net worth of more than $8 million just to be in the top 1 percent.

Krugman’s estimates are crude and may not be accurate, but they make theoretical sense because financial wealth (as opposed to real wealth) is pure debt, so it is a zero-sum game.  For the purposes of analyzing monetary policy (interest rates and inflation), we can ignore real assets like vehicles and housing and just look at financial assets (which are debts).  Excluding real assets, most Americans have a net financial debt and we mostly owe it to the top one percent richest Americans who have the most financial assets.

Below is another estimate of the distribution of financial assets from inequality.org: 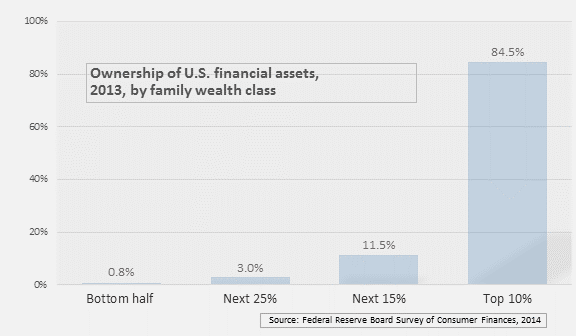 This graph reflects a common confusion about what is a financial asset versus what is a real asset because it includes corporate stocks as part of ‘financial assets,’ but stocks are not purely financial.   Financial assets are pure debt, whereas a share of corporate stock is not purely a debt.  A stock is a share of ownership of the real assets (capital) of a corporation that gives a right to the future profits earned by that capital.  If stocks were excluded from the above graph, then all the bars would be much lower.  Most of the bottom 90% of families would probably have negative financial assets.

For this reason, higher inflation would probably help most people in the bottom 90% (if not the bottom 99%) because it would reduce the real value of our financial debts and stimulate higher employment that could raise wages.  If higher inflation would hurt anyone, it would manly hurt the top 1% who own most of the debt.  They are also the most to blame for creating the 2008 recession by hoarding their financial assets which has created a legacy of lingering unemployment

Most people don’t care about monetary policy even though it has a big impact on everyone.  Amazingly, a lot of the bottom 99% seem to have been convinced that higher inflation would be a terrible thing even though they would personally gain.